TVTOR at Williamsburg Waterfront in September (more by Amanda Hatfield) 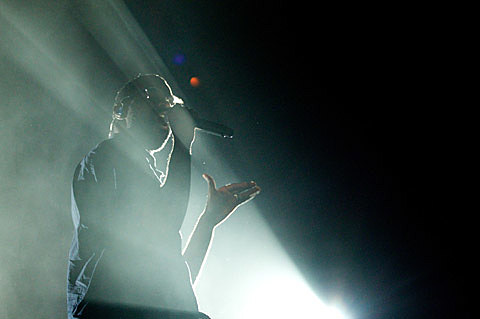 Stabbing Eastward (Tunde Adebimpe of TV on the Radio and Ryan Sawyer of Tall Firs) is playing Glasslands on November 26 with DOZ. Tickets for the show are on sale now.

Speaking of bands featuring members of TVTOR, Jane's Addiction released their new album, The Great Escape Artist, this week. The album is their first since 2003's Strays, and features bass, keyboards, programming, and guitar by TVOTR's Dave Sitek. Jane's played two shows at Irving Plaza this week to celebrate. We have more about that on the way.

TV on the Radio were last in NYC when they played Terminal 5 earlier this month during 'Advertising Week.' They have other dates coming up including Moogfest in Asheville, NC at the end of this month. All of their dates below...

Filed Under: Stabbing Eastward, TV on the Radio
Categories: Music News, tour dates
Comments
Leave A Comment
Back To Top