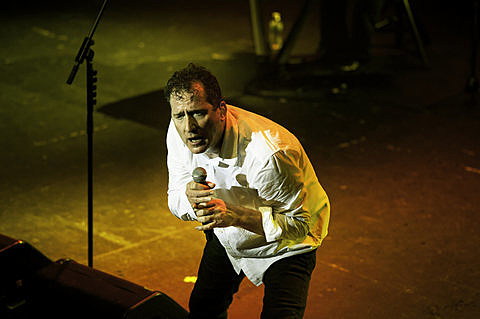 A camera boom fell on the crowd at Stubb's during an OMD show at SXSW Friday Night, March 18th. The incident would probably rank in the top 5 things people were talking about on the street (and on Twitter) in Austin last week. OMD have released an official statement which you can read, along with videos of people getting carried out on stretchers and stuff, below...

OMD release a statement on Incident at OMD Concert at Stubbs at SXSW, Friday Night March 18 during SXSW.

During their tour across the US, OMD played 3 shows in Austin during SXSW. In an unfortunate incident, four people were injured, after a camera boom fell into the crowd at OMD's South by Southwest concert at Stubbs on Friday night, March 18. An Austin-Travis County EMS spokesperson told KXAN that four injuries were minor. Those injured were taken by ambulance to University Medical Center Brackenridge, the station reported. "I think we need some help up here," OMD lead singer Andy McCluskey said before taking the stage.

Various media have misconstrued comments made from the band on the incident. A statement has been prepared by Andy McCluskey:

"Once we realised what had actually happened, and that there were people who needed medical treatment it was obvious that we could not start playing. I guess that if there was any 'luck' involved.. it was the fact that the camera crane fell before we actually started.. it would have been much more confusing and slower to resolve if we were into the set. I expected the concert to be cancelled. We just waited to see if the injured were going to be OK.. (I hear that they are OK). Once the police said it was fine to play we decided that we should at least do something for those who had paid money and waited until 1.30AM.. Even though the 2AM curfew would not be pushed back! It felt rather weird at the beginning, but slowly the band and audience started to re-connect.. it was actually a great 7 song set! And an even greater relief that no-one is permanently hurt!

It was very unfortunate that this accident had to occur during SXSW right as we walked out on stage. We are thankful that no one was hurt too badly and we hope for all that were injured to make a swift and full recovery. We plan to get in touch directly with the injured people.

Please note that we have been misquoted in some of the media, slandering Stubbs, which is not the case. We unfortunately had our set cut at another venue in a very unprofessional manner earlier in the week and that information was misconstrued with our statement about the accident at Stubbs."