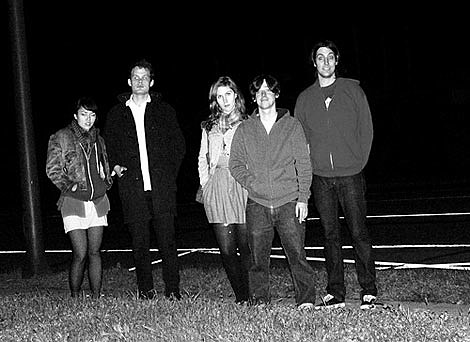 So many people have been in ASDiG since the project started in 2006 - touring members especially have come and gone. But I am happy and excited to let you know that we now have what could really be called a stable line-up now. The sad news is that Robin & Lauren are no longer singing with ASDiG. For various reasons (out of state grad school; boyfriend's broken limbs, work) neither were readily available while we were recording Ashes Grammar. These were dark times! But then all of this great stuff started to happen where Josh and I just said fuck it and kept working on the album. And then longtime fan and west philly neighbor Ryan Newmeyer wrote out of nowhere to ask what kind of fuzz pedal I use (<3<3<3 love you so much zvex fuzz factory <3<3<3) and i asked if he knew any singers. did! her name was (is) annie fredrickson. josh, annie, would spend many late nights in lambertville west philly south anywhere we could make noise starting from scratch, ultimately finishing the album, generally coming together as friends a band. good times!< p>

And then, when Ashes Grammar was done and we all got really drunk and got some normal sleep and listened to songs that weren't our songs etc... and the three of us decided we really liked the album and wanted to go on tour for as long as we possibly could to support it. But no one else wanted to go, so it was kind of dark times again. But then it turns out that Ryan plays bass! And then Josh's friend Adam Herndon joined to play drums (Josh now plays guitar/synths/whatever and sings)! And then we had this singer search where so many incredibly talented singers from all over the world sent us demos and tried out and it was crazy, we had no idea there were so many people who would want to join our little band. It was a really hard decision but in the end we are very happy to introduce you to Jen Goma when we go out on tour next week.

Anyway, things feel really good now. Everyone in this band really wants to be in this band and they are all talented people. It feels like we actually are a band and can give alot of ASDiG songs the live treatment (I think) they deserve.

Also, we've already recorded another album's worth of new songs and we are going to be touring so so so much next year in addition to this fall. Hope to see you out there! - A Sunny Day in Glasgow

A Sunny Day in Glasgow's new lineup will hit the road on November 12th and stay on it for a month until they eventually hit NYC for two shows: 12/12 @ Union Hall (tickets) & 12/13 @ Le Poisson Rouge (tickets). All dates below...