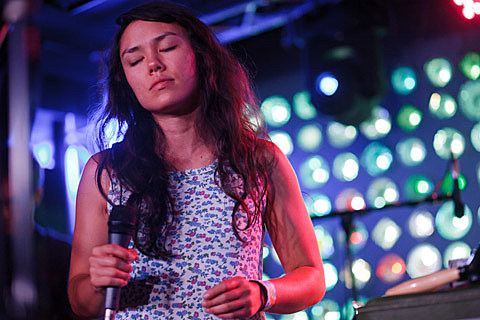 A Sunny Day In Glasgow returned this year with Sea When Absent, arguably their most ambitious record to date, and perhaps their most acclaimed too. The band have just released a remix of album cut "In Love With Useless (The Timeless Geometry In The Tradition Of Passing)" remixed by their pals Fang Island. He pulls the rhythm section to the fore here, burning off some of the original's haze in the process. (Not that there was anything wrong with that haze!) Stream it below.

As mentioned, Fang Island's Jason Bartell will be touring with ASDIG around the holidays. It turns out this will be in the form of a new duo called Wins which also features Cassandra Jenkins (of Eleanor Friedberger's band). You can stream a song from Wins below. ASDIG and Wins play NYC on December 27 at Rough Trade with Ava Luna on the bill as well. Tickets are still available and if you'd like to go for free, we're also giving away a pair. List of all dates and contest details below.

And finally, A Sunny Day in Glasgow have also given us their Top 10 LPs of 2014 which includes a few familiar faces but some left-field picks as well. Check out their list below...

======================
For a chance at winning a pair of tickets to see A SUNNY DAY IN GLASGOW AT ROUGH TRADE: either tweet something that includes both @BrooklynVegan AND "ASDIG" in the tweet, or send an email to BVCONTESTS@HOTMAIL.COM with the subject line "ASDIG". Include your first and last name in the email. We'll pick a winner at random and contact them with more details. If you enter by email, it will not be shared with anyone else. Good luck!
======================