"So, um, yeah that was Kim Gordon who just walked by me and then got on stage to play one Kraftwerk song. This not happen again." - Joel Mellin 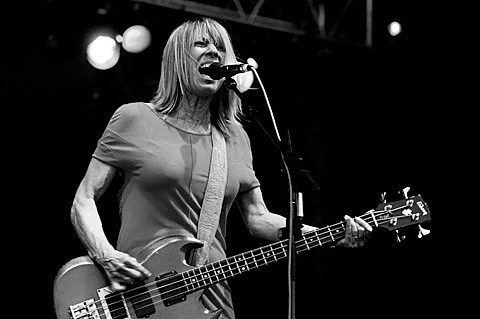 Sonic Youth's Thurston Moore and avant-garde musician/composer John Zorn will team up for a benefit for The Poetry Project at St. Mark's Church on May 4 with John on reeds and Thurston on electric guitar. The show will begin with an opening set of poetry by LaTasha N. Nevada Diggs, Erica Kaufman & Dana Ward, and will be hosted by John S. Hall. The performance will be in the Sanctuary with drinks served before and after the show in The Parish Hall. Beer will be provided by Brooklyn Brewery and wine by City Winery. Tickets are on sale now.

In other Sonic Youth-related news, Steve Shelley kicks off a tour as the drummer of Disappears in Chicago tonight in support of their new album, Pre Language, which is the first recorded with Steve. The tour is with Lotus Plaza and hits NYC on Thursday (4/19) at Glasslands with Noveller. Tickets are still available.

Meanwhile, the Lee Ranaldo Band will hit the road next month with M. Ward in support of Lee's new album, Between the Time and the Tides. That tour hits NYC on 5/11 at Webster Hall and is sold out. Lee also opens four of the just-announced Wilco shows including two in NY and one in CT. Check out the video for "Off the Wall," which includes live footage from Glasslands, along with the four Wilco dates listed, below.

As for Kim, to coincide with Kraftwerk's MoMA residency, a tribute show for the band went down this past Tuesday (4/10) at Littlefield and featured a performance by an altered lineup of Free Kitten (billed as Free Kitten[esque] with Kim Gordon, Julie Cafritz and Pete Nolan of Magick Markers. Check out video footage of that tribute show below and skip to the 1:29 mark for Free Kitten[esque]'s take on Kraftwerk's "Heavy Metal Kids."

In other Sonic Youth news, a 13-year old "fan" wrote them a letter about their unfortunate lack of talent which the band posted to their facebook page and you can read here:

"I'm going to be 100% honest with you.
I'm 13. I have a little band. We are so much better than you. Honestly. You are the worst band I have ever seen in your entire life. You are worse than Rebecca Black. The bass player just hacks the bass and plays one chord. The guitar players are playing out of tune guitars and... well not even playing actually chords. I couldn't sound worse if I tried. It actually sounds like a joke to me. The drummer is okay. But honestly the vocalist is completely out of tune. Oh and The Black keys have two people and are better than you.

From: Me, and pretty much everyone else who has accidentally stumbled upon your terrible music."