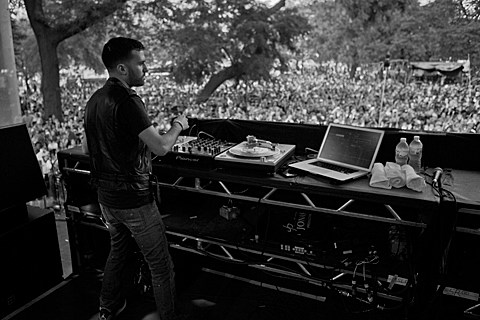 In honor of World AIDS Day, December 1st, some of the biggest names in the music and media industry are partnering with Lifebeat, Music Fights HIV/AIDS to draw urgent attention to the dramatic rise in HIV among young people ages 13-24.

From Nov. 24th - Dec 1st, a coalition of major media outlets, celebrities, online music distributors, and music venues will display banner ads, editorial content on websites, and activate their social media platforms, visual messages in support of #MusicFightsAIDS will be displayed every two minutes on nine jumbo screens in the heart of Times Square reaching more than 2 million people daily. Venues and nightclubs will distribute HIV prevention materials, activate their promotional and social media channels, and encourage their audiences to share a unified message. Superstar DJ's Steve Aoki, Dirty South, The Chainsmokers, A-Trak, Fedde Le Grand, have recorded a new series of PSAs to amplify awareness among their young fans. PSAs will be featured on mtvU, Spotify and other partner sites.

As quoted via press release above, HIV/AIDS prevention foundation Lifebeat has teamed up with multiple musicians and others in the industry for a week-long fight against HIV/AIDS leading up to World AIDS Day, December 1. The week will include a benefit show happening in NYC at Pacha on November 30, headlined by A-Trak. Also on that bill is Fedde Le Grand, Tritonal, Green Lantern and more special guests TBA. Tickets are on sale now.

That same week (11/25), A-Trak releases the physical version of his new Full EP on his own Fool's Gold label. That EP features the single "Push" with vocals from Miike Snow's Andrew Wyatt, who you can also catch in NYC at Baby's All Right TONIGHT (11/19) with DJ Prince Rama and others (tickets).

Watch the lyric video for "Push" below...