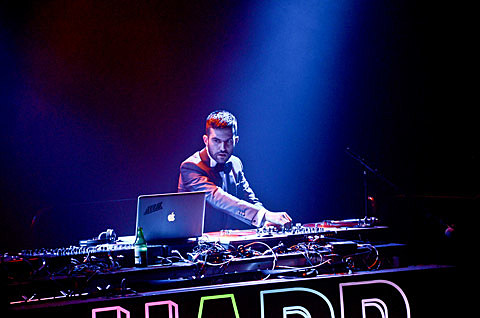 After a pair of appearances at Coachella (as himself and as part of Duck Sauce) A-Trak will hit the road for a string of US dates with Kid Sister and The Gaslamp Killer dubbed the "Magic 8-Ball Tour". That "Magic 8-Ball" rolls into NYC on April 30th at Terminal 5. Tickets aren't listed yet. All dates are below.

Meanwhile catch A-Trak with Art Brut, White Denim, Lissy Trullie, and The Suzan at Webster Hall on March 4th, aka night one of the two night Downtown Records party that continues at Terminal 5 on March 5th with Miike Snow, Major Lazer, Santigold, DJ Mehdi and others. Webster tickets are still on sale, though Terminal 5 is sold out.

If you don't have a ticket for the Terminal 5 show, you can still catch DJ Mehdi at his own headlining date at Music Hall of Williamsburg on March 4th with JDH & Dave P (Fixed). Tickets are still available.

Speaking of dance parties at Music Hall, Holy Ghost!, who opens for Cut Copy at two of their three upcoming Terminal 5 dates, will headline Music Hall of Williamsburg on April 29th. Tickets are still on sale.

Midnight Magic, who just played Music Hall with Escort, opens the 4/6 Cut Copy show which is the only Terminal 5 show with tickets left.

All current tour dates and some videos below.