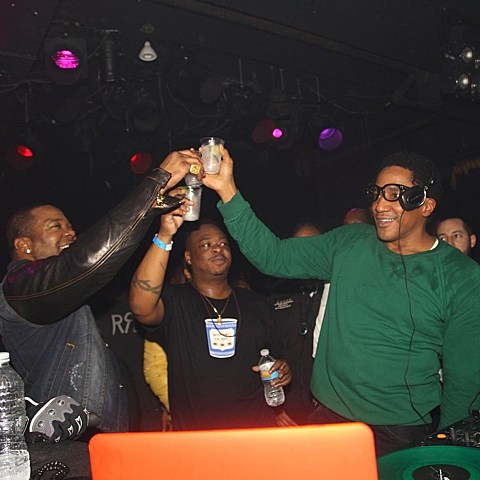 A Tribe Called Quest reissued their 1990 debut People's Instinctive Travels and the Paths of Rhythm for its 25th anniversary last week (it got a 10 on Pitchfork) and they held two celebrations for that over the weekend. First, they reunited on The Tonight Show Starring Jimmy Fallon like they said they would. Watch them play "Can I Kick It" with The Roots on that show, below.

Then the next night was their release party at Santos in Manhattan. It was billed as having DJ sets by Q-Tip and Ali Shaheed Muhammad with appearances by Phife and Jarobi, which got people wondering if they'd perform together there too, but no such luck. It was packed and looked like a total party though. Redman showed up, and a video of that is below.

Phife Dawg also talked to Rolling Stone about the reissue:

You were 19 when People's was released. Is it odd to be looking back at the 25th anniversary?

It's odd in a good way. I never expected it to be this big. I just thought we were going to be celebs in the hood. Like, honestly, within 25 years, when you go to places like Australia and Japan and Amsterdam and London and Germany and these people know [the songs] word-for-word, it's crazy. So it's nothing but a blessing at the end of the day, but I don't remember a lot. It's kind of a blur. Being that I was only on four songs on the album, my focus wasn't completely there yet. I didn't take things too seriously until Low End Theory. I just remember this being the album where, "Okay, Tribe made a dent, so the next album, we've got to kick the door off the hinges."

When asked if he agreed with the decision that their 2013 shows with Kanye West would be their last, Phife said, "I don't agree with it, but it is what it is." He also added that he thinks it's "ludicrous" that they're not performing together and said:

I can't really talk about it, to be honest. Because when I talk, my mouth gets me in trouble. I'm the type of dude that tries to keep it 100 and I always get in trouble for it. But I will say: it's dumb, and I don't agree with it and we're doing the fans a great injustice by not getting together and rocking, and that's all I can really speak on as far as that goes.

You can read the rest of that interview here. And you can also watch a video interview recently done with Jarobi outside of Q-Tip's childhood home, below.