A Tribe Called Quest takes it to the stage. 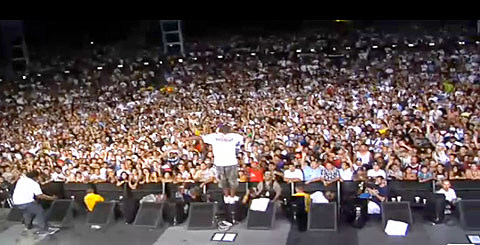 The Sundance Film Festival is the pre-eminent independent film festival in the US, and 2011 features some interesting competitors in the way of music (and music related) film. First up is a new documentary on a legendary hip hop crew, A Tribe Called Quest. directed by Michael Rapaport (yes, that one). Beats, Rhymes and Life: The Travels of A Tribe Called Quest chronicles the internal battles between Q-Tip & Phife Dawg and features appearances from Nas, De La Soul, The Roots, Mos Def, Kanye West, Large Professor, Prince Paul, all four members of ATCQ, and many many others. Trailer for the film is below.

Elgin James has distanced himself from his FSU past, and now he's stepping behind the camera for a new film etitled Little Girls. James serves as Director and Screenwriter for this feature...

"Amidst the stark landscape of the Salton Sea, two 15-year-old girls test the limits of their friendship when one follows the other to Los Angeles. Cast: Juno Temple, Kay Panabaker, Leslie Mann, Kate Bosworth, Kyle Gallner."

I didn't see the words "edge", "core", or "scene" anywhere in that synopsis. And yes, that Leslie Mann and Kate Bosworth.

James Taylor & Carole King will be the subject of Troubadours "A musical journey tracing the lives and careers of ...[these] pillars of the California singer/songwriter scene, which converged in and around LA's Troubadour Club in the late 1960s and early 1970s." This documentary is directed by Morgan Neville, who helmed docs on Stax Records, Iggy Pop, Johnny Cash, and many others.

Last but not least, Sing Your Song examines the man that I best knew for soundtracking my favorite Beetlejuice scene, Harry Belafonte. Besides sunny songs, the film "unearths his significant contribution to and his leadership in the civil rights movement in America and to social justice globally."

Full list of Sundance films is here, and you can check out the (must see) ATCQ trailer below.

--
Beats, Rhymes and Life: The Travels of A Tribe Called Quest