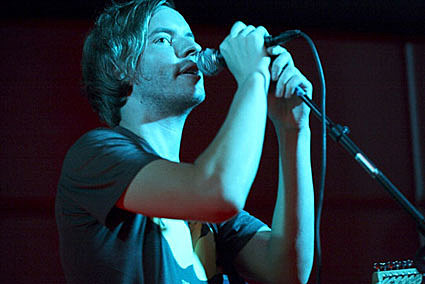 The Creek and the Cave is a venue to see live music in Long Island City. You can find it on our venue map.

Fred Thomas is the singer of Saturday Looks Good To Me. They came out with a good album in 2007. That's them/him im the picture above playing the BrooklynVegan day party at R Bar during CMJ 2007. More pictures like that HERE.

Fred also has a new solo CD out. It's out on Magic Marker Records, and called FLOOD. All I've heard so far is the track streaming at his MySpace, and the one I have linked for download at the top of this post.

TONIGHT: Catch Fred Thomas live, at The Creek and the Cave. It's the album release show, and Brandon says it shoud be a blast.