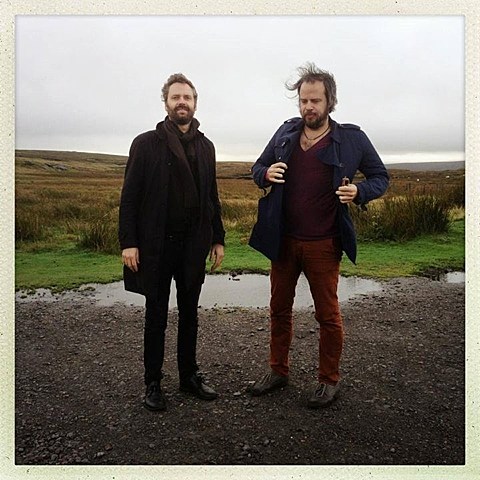 A Winged Victory for the Sullen, the collaborative duo of Stars of the Lid's Adam Wiltzie and pianist/composer Dustin O'Halloran, recently teamed up with choreographer Wayne McGregor (who is the resident choreographer at the Royal Ballet but was also behind Radiohead's "Lotus Flower" video and Atoms for Peace's "Ingenue" video) for his newest work, Atomos, which premiered in London this past October. According to Drowned In Sound, McGregor was listening to a lot of AWVFTS while rehearsing Atomos and asked them to provide the score to it. They agreed, and issued the statement:

The nature of this project has invariably guided our compositions into a strange world we did not create. We are really testing the ability to leave vanity, and the safety of our whole notes in the closet. It seems quite fitting that our next musical output is also our first foray into dance with this lovely human being, from that island across the pond, Wayne Mcgregor. We continue into the unknown.

And the new work has been receiving some pretty positive reaction. In Melanie Weaver's 5-star review of one of the London performances for The Upcoming, she called the score "thrilling [and] futuristic" and writes:

The contemporary costumes by Studio XO help create the optical illusion of falling light, bringing another element to the experience, however it is the ten dancers who are the real stars of the show, carrying out complex routines while appearing to do so with grace and ease.

Atomos is a masterpiece which demonstrates the huge new potential for the future of dance, through the introduction of technology and visual effects, and the show's impressive attention to detail helps to keeps the audience gripped throughout its entire 65 minute timeframe. Atomos can be highly recommended, both to seasoned dance enthusiasts and to those still discovering the art form.

A Winged Victory for the Sullen will be coming over to the US for six Atomos performances at Montclair State University on March 15, 16, 20, 21, 22, and 23. Tickets for the performances are on sale now.

AWVFTS will also be doing a few of their own shows surrounding those performances, including two in NYC on March 18 at Joe's Pub (early and late). Tickets for both Joe's Pub shows are on sale now. All of their upcoming dates, including the UK's ATP End of an Era Part 2 which starts later this month, are listed below.

A Winged Victory for the Sullen also contributed the track "Ti Prego Memory Man" to the new Ghostly International compilation, SMM: Opiate, which came out last week (10/29) and also features songs from Noveller, Black Swan, and more. You can stream AWVFTS's contribution below, and listen to the entire comp at SPIN.

AWVFTS also did their first remix project, taking on "Now Sleeps The Crimson Petal" from the new choral album by Gareth Malone, which he released this week (11/4) under the name Voices. The album features choral versions of songs by Radiohead, Bon Iver, Death Grips, and more. "Now Sleeps The Crimson Petal" is an original song based on the poem by Alfred, Lord Tennyson. Listen to their remix below.

In related news, as discussed, Stars of the Lid will do their first US shows in five years this December, including one at NYC's Church of St. Paul the Apostle on December 17. Tickets for that show are still available.

All AWVFTS dates are listed, along with those song streams, below...

A Winged Victory for the Sullen - "Ti Prego Memory Man"