Don't worry, this has nothing to do with an outbreak of disease. Just a messed up and costly incident regarding a kitchen knife and airport security... 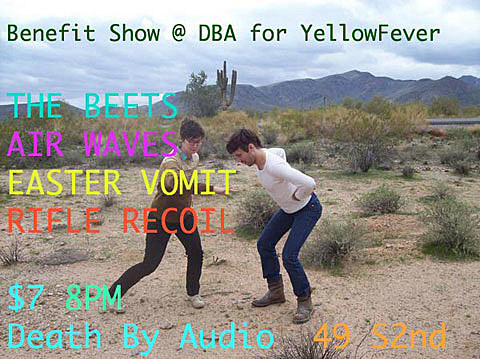 Please help spread the word for this show. Thanks! AND come to the show!

Jennifer of Yellowfever accidentally took a kitchen knife in her backpack when her and Adam were flying from texas to NY to play the Seaport show. She had no idea it was in her backpack and the texas security instead of throwing it away put her in jail and bail was set at $5,000. $500 of that had to be paid for her to get out. 24 hours later she was released and then still had to find a lawyer. Yellowfever was unable to play the show. After lawyers fees and the bail it will cost them a few thousand dollars. The knife was supposed to be kept in the van for cooking for the rest of the tour. Silly Jennifer.

SOOOOO come see these bands and pay $7 to see a great show and to help an awesome band out.