Weekend Nachos at A389 Anniversary 2012 (more by Fred Pessaro) 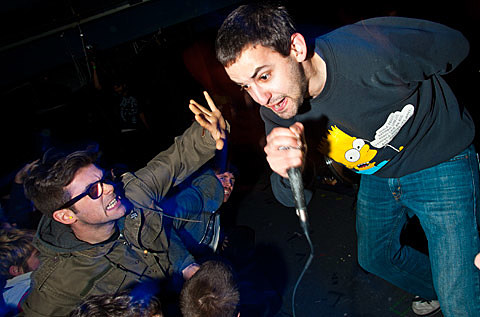 Hardcore and grind-oriented A389 Recordings have announced the first round of bands for their 11th annual Anniversary Bash, which takes place in Baltimore on January 15-17, 2015. Like in previous years, there are some exciting names booked so far including Haymaker, Weekend Nachos, Ilsa, Castle Freak, Genocide Pact, Pharaoh, Noisem, Sex Prisoner, Starkwather and Ampallang Infection. Many of these bands are on or associated with A389, and almost all of them, with the exception of Castle Freak, Genocide Pact, and Starkwather, played last year's event too. Stay tuned for more announcements, but in the meantime, this is reason enough to get excited.

Along with Maryland Death Fest, the A389 Bash is one of at least two killer heavy festivals happening in Baltimore in 2015.