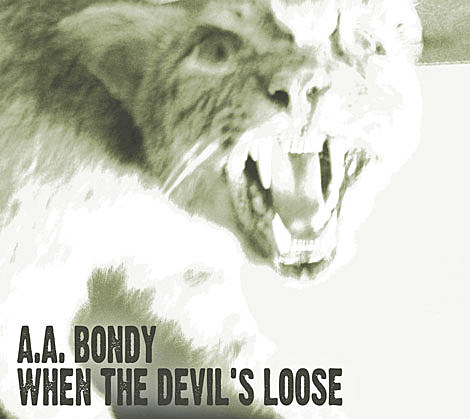 A.A. Bondy's sophomore album, When The Devil's Loose, will be released September 1, 2009 on Fat Possum.

Recorded primarily in Water Valley, MS in April and May, When The Devil's Loose expands upon the stripped-down and stirring sound of his debut album, American Hearts. A full band now accompanies him on most tracks, lending a full, roomy sound to 10 haunting songs carried along by Bondy's lived-in voice. When The Devil's Loose sounds almost from another era, whether it's a quiet, spooky twang ("Oh The Vampyre"), lullaby-like ("On The Moon"), inflected with old-time R&B ("To The Morning"), or colored with traces of '60s pop (the buoyant "I Can See The Pines Are Dancing" and the melancholy, ethereal cadence of "When The Devil's Loose"). [PR]

Still out on tour with NYC's Holly Miranda, the pair played The Bell House in Brooklyn on June 6th, and AA was at the Sasquatch Festival not long before that. Videos from the Bell House & Sasquatch, all upcoming tour dates, and the new album tracklist, below...