DOWNLOAD: A.A. Bondy - I Can See the Pines Are Dancing (MP3) 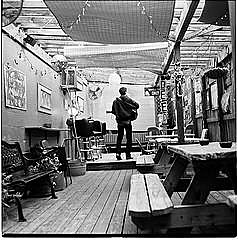 AA Bondy is on tour and in town Wednesday night (September 9th) for a show at Mercury Lounge with Tim Easton (New West Records), Willy Mason (Astralwerks) and Dave Godowsky (yahtzees). Tickets for that are still on sale.

AA's new record, When The Devil's Loose, came out September 1st on Fat Possum. A new MP3 from that, "I Can See the Pines Are Dancing," is posted above.

You may know that Bondy (a.k.a. Scott Bondy) used to play with the band Verbena, which he started with high school friends Les Nuby (guitar, and later drums) and Duquette Johnston (bass). I recently found out that Les' new band is Vulture Whale, who recently came to NYC for a set of shows at the end of August...

"Live the band is amiable and capable. McDonald, through some unfortunate staging [at Pianos], wound up off to the side in the shadows. There were gestures and faces made; his lines' character and cleverness were intact, unemphasized. Lead guitarist Lester Nuby (late of Verbana, where I think he was the drummer?) has chops, boys and ladies, though the guy manning the boards hid him in the mix for the first couple numbers. (Backing vocals were sort of off all night and overwhelmed the lead.) They don't jam, thankfully, though "That's Cold" got teased out and the climactic "Land It" (from their first self-titled album) is designed to be pounded at.

Band got through all but two songs from the superior second record but folks in the crowd responded more to the earlier material. (They also played "Rearranged," maybe one other?) Vulture Whale was the first of four bands Saturday night (after headlining Maxwell's?), there were a decent amount of people there for that. Room wasn't thick with accents or anything, but if, like the band suggested, many were expat Alabamans, they can only be accused of knowing better." [Heartonastick]

A video of Wes from Vulture Whale performing and talking on Birmingham's WCFT, with all AA Bondy & Tim Easton tour dates, below...

Wes of Vulture Whale on Talk of Alabama

Backstage Sessions : AA Bondy - The Mightiest of Guns from Hard to Find a Friend on Vimeo.