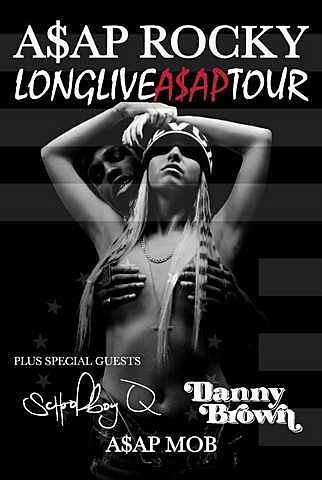 Three of the biggest current forces in indie rap, A$AP Rocky (and his A$AP Mob), Danny Brown, and Schoolboy Q will be touring together this fall. Looks like A$AP Rocky's got the headlining spot, as it's dubbed the 'LoveLiveA$AP' tour (after Rocky's album of the same name, due out 9/11), as you can see in the flier above, which borders between provocative and a little creepy.

The tour doesn't hit NYC (yet?), but there are some shows nearby, including Toads Place on September 23 in New Haven, CT and Electric Factory on November 18 in Philly. Tickets for the New Haven show and the Philly show go on sale Friday (7/27) at noon.

Meanwhile, all three rappers have other upcoming shows in the NYC area before this tour kicks off. A$AP Rocky will be on Randall's Island this weekend (7/28-29) for Catalpa Fest. Schoolboy Q plays Rock the Bells at PNC Bank Arts Center (9/1-2) (ASAP only plays Rock the Bells in California), and he and Black Hippy crewmate Kendrick Lamar are among the support acts for Wiz Khalifa and Mac Miller's tour which hits Jones Beach on August 2. Danny Brown is keeping it a bit on the smaller spectrum, seeing as he will play Warm Up on August 25 at MoMA PS1 with Just Blaze, Nick Catchdubs, The Stallions, and BAIO (of Vampire Weekend). Tickets for Warm Up are on sale now.

Most of the LiveLoveA$AP tour coincides with Kendrick Lamar's upcoming tour with Ab-Soul and Jay Rock (aka all of Black Hippy except Schoolboy Q). However, the first few dates, including Kendrick's NYC show at Terminal 5 (9/15) happen before the LiveLoveA$AP tour. Maybe Schoolboy Q will make an appearance at that (more details still TBA)?

A list of all dates on the LiveLoveA$AP tour and videos of all three rappers below...