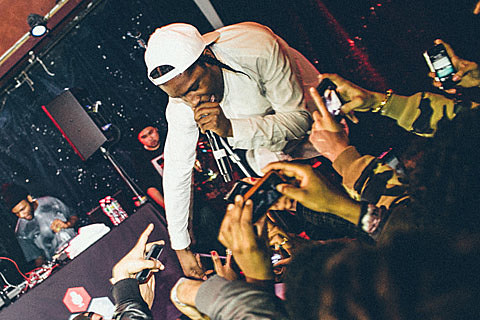 As mentioned, A$AP Rocky, whose new album, Long. Live, A$AP, has been holding up pretty well this year, is on tour with Rihanna now and that tour will come to the NYC-area for shows at Prudential Center on April 28 and Barclays Center on May 4 and 5. But if you'd like to see Rocky do a headlining set a much smaller venue, you're in luck because he announced that he'll be at Highline Ballroom on April 28 with DJ Sinatra and "special guests" as an after show for the Prudential Center show. Tickets for that show are on sale now.

Recently, A$AP Rocky made a video for his track, "Wild for the Night," which was produced by Skrillex (and he's featured in the video) and did a remix Jessie Ware's "Wildest Moments," which will appear on the North American release of her album, Devotion (due out 4/16 via Interscope). Updated dates are listed, along with that video and song stream, below...