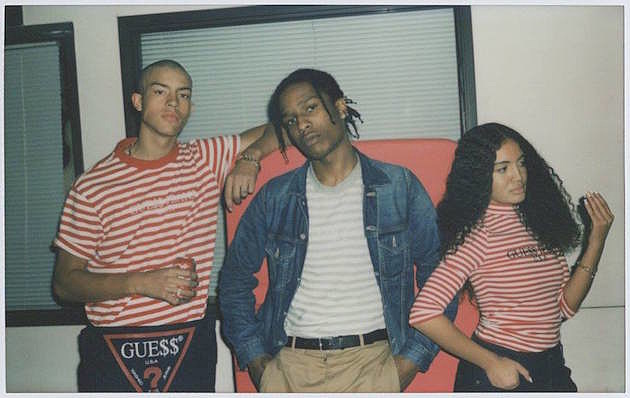 We are in the midst of New York Fashion Week 2016, the glitziest time of year in the city. In addition to all the fashion shows, there are tons of parties, many of them with a music theme. Kanye West is throwing a big one at Madison Square Garden on Thursday (2/11) which will double as a premiere party for his new album. Tickets are still available.

Most of these NYFW parties, however, are much smaller and invite-only. But that never stops people from trying to scam their way in, though. For example, A$AP Rocky will celebrate his new limited-edition Guess Originals collection with a party at Lower East Side club The Box on Thursday. He'll perform, as will A$AP Twelvyy, Playboi Carti and Cozy Boys. Rocky's Guess Originals collection will be officially be available next week (you can order online now though), and for his line the familiar GUESS logo becomes GUE$$. He talked to The Hollywood Reporter about it:

I actually looked into the archives just to see what was available and after that my main focus was silhouettes and reconfigurations, because I didn't want it to fit exactly like those jeans back then, when they were so big and baggy. I wanted to give kids today knowledge of what Guess meant to Hip Hop and the urban community in the nineties and late eighties. From the drug dealer on the corner with the t-shirt, the rapper Nas saying 'When I get dressed, it's nothing less than Guess' and Tupac in the movie Juice

There's a NYFW tribute to David Bowie happening at Electric Room below Dream Downtown on Friday (2/12). The band is made up of fashion people (Michael H, Andy Hilfiger, etc), but they're promising appearances by drummer Sterling Campbell (B-52's) and Earl Slick and others. Invite only.

Ra Ra Riot will perform at Gramercy Hotel's Rose Bar on Wednesday, February 17. Also invite only but they do play Webster Hall next month.