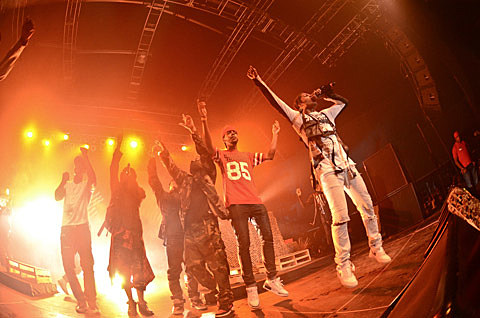 A$AP Twelvy is currently on tour with Rocky and the rest of the A$AP Mob, but upon returning home, he'll headline his show in NYC on November 22 at HIghline Ballroom, billed as "A$AP Twelvy & Friends." Tickets for that show go on sale today (10/12) at noon.

Meanwhile, that tour had a short break this week during which soccer video game commercial star A$AP Rocky briefly returned home to NYC, and while he was here, he and Gucci Mane came out as guests at Waka Flocka Flame's Irving Plaza show, which went down this past Tuesday (10/9). You can check out a video of that below. Rocky comes out around 6:03 and in typical Rocky-making-a-surprise-appearance fashion, pretty much blows up the stage at that point.

The short break in the A$AP tour ended last night (10/11) when the mob (and Schoolboy Q and Danny Brown) hit Chicago's Congress Theater and it continues tonight (10/12) in Milwaukee. Pics from the NYC stop at Roseland Ballroom are HERE.

It's too bad that Rocky will be too busy in Salt Lake City to make another trip home for the Flatbush Zombies show at Santos (10/17) during CMJ. Speaking of hip hop shows at the Highline, Curren$y's Jet Life crew is doing a record release party for Jet Life World Order 2 at Highline Ballroom on November 20, two days before the A$AP Twelvy show. The exact lineup of who will be performing at this show has not been announced yet, other than "special invited guests." Tickets for the show go on sale today (10/12) at noon. Jet Life World Order 2 drops the same day as the release show (11/20) via iHipHop Distribution/Jets International and you can stream the first single, "No Sleep" (feat. feat. Trademark Da Skydiver, Young Roddy & Curren$y), below. The album will also feature Smoke DZA and others. That's the cover art above.