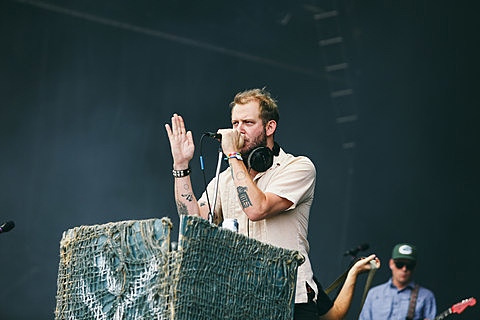 As discussed, Bon Iver's Justin Vernon is curating a music festival in his hometown of Eau Claire, WI called The Eaux Claires Music and Arts Festival, which takes place on July 17 & 18, 2015 at the Foster Farm. Since we last spoke, it was revealed that The National's Aaron Dessner is helping him curate it too, and that tickets go on sale at 1 PM EST today (12/18). Justin and Aaron spoke about the fest, via press release:

Justin Vernon says, "After several years of touring and playing music festivals of all different types around the world, I wanted to put together an event that would honor what we love about this place -- including an independent attitude and blaze orange caps -- but also shine a light on less familiar and surprising elements that are already weaving themselves into our future. Having this festival right in my backyard gives me and the guest artists a chance to share familiar work and new creations in a setting close to my heart and different than any other stage in the world. To create this event within view of the Chippewa River -- the very river that defines this place -- makes it all the more meaningful. We're fortunate because the Chippewa Valley already has a history of great music festivals. Everyone -- the city, the county, and the Country Jam folks -- has been very supportive. They're helping us take it beyond music and into a celebration of film, art, and things still in the works... just walking around the place is going to be an experience."

Aaron Dessner adds, "Justin and I have been friends and collaborators for years. Working together to create and curate Eaux Claires is something we've been talking about for a long time. To finally see it come together, and to imagine the music, art and community the festival will bring together, is very exciting."