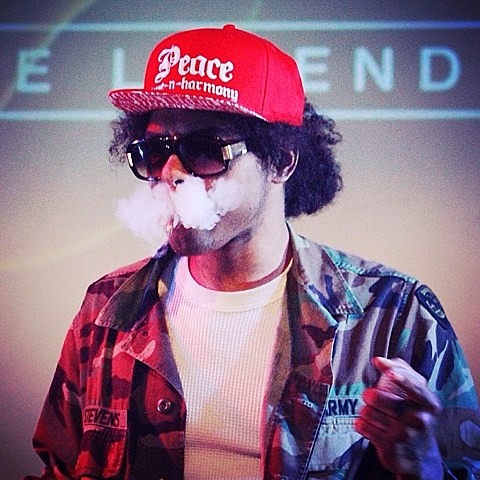 After Ab-Soul (and the rest of the Black Hippy crew) appeared on stage with Kendrick Lamar during Tuesday's Roseland show, he stuck around NYC for his own show at SOB's last night (2/27). Due to the previous night's events, everyone pretty much knew something similar would go down at SOB's, which Ab-Soul acknowledged early on at last night's show, and proceeded to make the hour-ish long show a split between solo Soulo and a showcase of his friends/collaborators.

Because there's no backstage at SOB's and the smoke-filled room was packed, Ab-Soul's guests had to squeeze their way through the center of the crowd to pop up on stage. So depending on where you were standing, you knew who was about to get on stage, but maybe seeing them walk right past you was even more exciting (I for one, was on the side of the stage, and have no idea). First out was Black Hippy cohort Jay Rock for their track "Lust Demons." After that, he hung out on stage as the third Black Hippy member of the night, Schoolboy Q, came out to absolutely murder "Druggys Wit Hoes Again," which had the crowd screaming in the chorus. Then Soulo took a break from the Black Hippy members, and spent the next chunk of his set bringing out NYC rappers, like Smoke DZA, Joey Bada$$ (who also came out during Ab-Soul's set at Terminal 5 in 2012), and the most riotous of the local guest spots, A$AP Rocky, who came out in his usual manner of rushing the stage with hypemen to do his own track, "Angels."

Finally, towards the end of the set, Ab-Soul played "Illuminate," which of course meant the last Black Hippy member of the night was about to hit the stage: Kendrick Lamar. After that track, Kendrick asked the crowd, "Can I do one of my own?" The crowd screaming in the affirmative was answered by the beat to "Backseat Freestyle" and before you could even hear Kendrick, just about every person in that room yelled, "MARTIN HAD A DREAM... MARTIN HAD A DREAM... KENDRICK HAVE A DREEEEEEEEEEAM." Then he stuck around for yet another of his own cuts, "m.A.A.d. City," followed by Ab-Soul closing the night with arguably his best track, "Pineal Gland."

The show opened with sets from G.R.A.M.Z., Rikki Blu, an unbilled set from the Ryder Gang, and the very intriguing Bishop Nehru. Nehru is from NYC, he's only 16, and like fellow young NYC rapper Joey Bada$$, Bishop Nehru sounds most influenced by the rap that came out before he was even born. And even if his influences are worn on his sleeve a bit, he's still a promising young artist, and ended his set by cutting the beat and delivering a rapid fast verse on his own, to which the crowd only screamed louder and louder as he went on.

Bishop Nehru's recent music video for "Misruled Order," which he directed himself, and a video of Kendrick and Ab-Soul doing "Backstreet Freestyle" at SOB's, below...