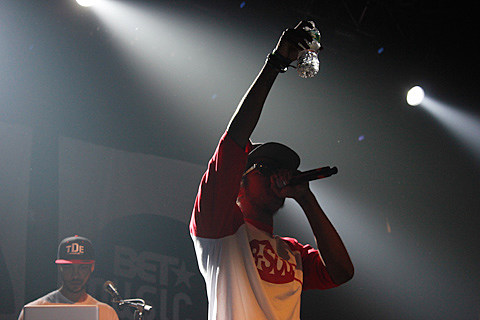 Ab-Soul, who released the excellent Control System and toured with fellow Black Hippy members Kendrick Lamar and Jay Rock last year, is gearing up for a few shows this year. He was recently announced for Washington State festival Sasquatch! and was just confirmed for Austin's SXSW as well. Before SXSW, he'll do a few club dates, including one in NYC on February 27 at SOB's. Tickets for that show are on sale now. All Ab-Soul dates are listed below.

Though Ab-Soul is the only Black Hippy member confirmed for SXSW, we wouldn't be surprised to see the other three guys there too. We already mentioned that Kendrick Lamar is rumored to be there, and Schoolboy Q (who like Ab-Soul, plays Sasquatch) and Jay Rock are free during that time as well.

UPDATE: It's confirmed: Kendrick Lamar, Schoolboy Q, and Jay Rock will all be at SXSW 2013.

Kendrick Lamar took things in the Black Hippy camp to the next level last year with his major label debut, good kid, m.A.A.d city, and at some point this year, Schoolboy Q will become the second Black Hippy member to release a major label album, Oxymoron, which he's in the studio recording now. Somebody tell Jay Rock to get an album out soon too!

Ab-Soul is also working on a collaborative album with producer/singer JMSN, who contributed vocals to good kid, m.A.A.d. city, called Unit 6, which will be out at some point this year. The first single from that album, "You're Gone," is a wacked-out cut which sounds pretty good, and has a chorus which sounds a lot like Ab-Soul is saying he roofied a girl but RapGenius says he's talking about lean. You can listen to it and check out a list of all upcoming dates below...