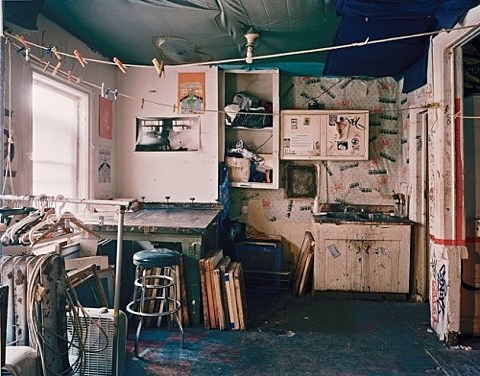 It's been a few years since NYC venue ABC No Rio began talking about their replacing their current building with a new progressive, energy efficient building, and Bowery Boogie reports that construction may begin in 2015. An update from venue director Steve Englander reads:

Thank you so much for your past support for ABC No Rio. We've shared with you a lot of the ups and downs we've faced with our project to build a new facility. It's been tough and we're glad that you've had our back. Thank you for your ongoing commitment; and now, we have some good news to report.

2014 had a rough beginning, but is ending on a high note, with the exciting prospect of beginning construction on the new building soon. As you've followed so many of the challenges we've faced, here's a quick recap of where we are, and the plans ahead.

Unfortunately, the bids we received when we put the project out to bid in early 2014 came in higher than our available funding; it was a tremendous disappointment. Last spring, however, we began discussing a better and more efficient way to move forward with the Department of Cultural Affairs. We then moved the project over to the Economic Development Corporation (EDC), which allows for much greater flexibility in project management and administration. It's also easier for EDC to incorporate our private funds into the project.

In October, we learned that we received an additional $1.5 million in City capital funding for our project. We're grateful to our City Council representative, Margaret Chin, and to the Mayor and the Department of Cultural Affairs for this support. Everyone -- including EDC and the construction management team they will bring on board -- is enthusiastic about the project getting off the ground. We plan to put the project out to bid again in spring 2015, and begin preparations for the first phase of construction.

As we prepare for construction for this first phase of our project, we are also planning "ABC No Rio in Exile," the continuation of our programming during the construction period. This period will provide a renewed and focused orientation towards collaborative work that brings ABC No Rio back to its roots. We will initiate and participate in projects with other organizations and venues, giving us the opportunity to expand our reach to new audiences and new potential supporters and to increase the involvement of new artists, musicians, poets and performers in ABC No Rio's programming.

This interim period will be challenging. The support we have received from the City has been important, but your support is critical and vital to ensuring we successfully complete construction, transition through our "exile" period and ultimately expand our reach.

As we plan for this dynamic and exciting future, ABC No Rio remains a place where people share resources and ideas in an atmosphere of camaraderie and mutual support.

Your support remains important to us. We trust that you will join us, and that we can count on your contribution to ABC No Rio as the year comes to a close.

As part of this appeal, we are delighted to offer to those contributing $250 or more a limited-edition photograph by Jade Doskow of the ABC No Rio Printshop. Jade was one of several photographers invited to document the building in advance of demolition.

You can contribute here or here, and contributions of $250 or more will include a limited-edition print of Jade Doskow's photo (pictured above) of the venue's printshop.