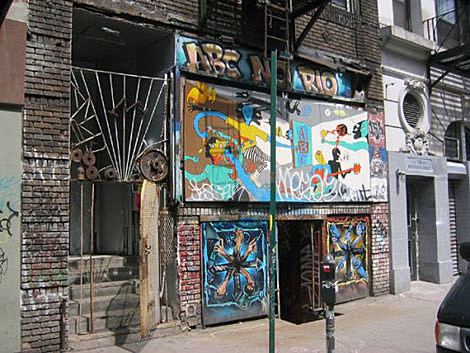 "Three years ago, when the collective that runs the community and cultural center ABC No Rio received the deed to the crumbling, graffiti-covered tenement that had housed them on the Lower East Side for nearly 30 years, members of the group and their supporters rejoiced.

Formed in 1980 after an art show on gentrification, ABC No Rio endured attempts by the Giuliani administration to evict it from its city-owned building on Rivington Street in the 1990s. So when the Department of Housing Preservation and Development decided in 2006 to turn the building over to the collective in exchange for $1 and an agreement that the group would make badly needed repairs, many saw the deal as a crucial step for the survival of a beloved local landmark.

Soon after the transfer, however, an architect determined that the building was beyond repair and would have to be replaced. The budget for the project soared to $2.4 million, from $700,000. And then fund-raising -- never easy for a small organization run mainly by volunteers -- became even more difficult as the economy declined. Housing officials became concerned that renovations did not begin as quickly as expected; others questioned the group's ability to finance the expensive task of a new structure.

But much of the uncertainty vanished last week when the Manhattan borough president, Scott M. Stringer, and City Councilman Alan J. Gerson allocated $1.65 million for a new building..." [NY Times]