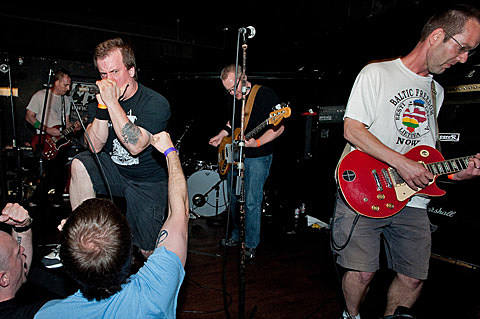 "Joe Martin, who played in Citizens Arrest during ABC No Rio's early days, remembers the space as offering a second chance. "For me, I had made the promise to myself that I would stop going to hardcore shows the day I got beat up. And then it happened to me, at one of the hardcore matinees they had--Judge, Born Against, and Affirmative Action. Some skinhead picked a fight with me and maybe I didn't get beat up, but I did get punched. So I said, that was it, no more, because I knew everytime I would go to a show from then on, I'd see this guy and panic and run away. But then ABC started, and right then and there, that feeling stopped. Every week I'd go there, I didn't care who was playing--I'd go support any band, and I guess for a while a lot of other people did too. There'd be a solid 50 people for every show."" [ABC No Rio history]

Citizens Arrest will play ABC No Rio again on 12/17/2011, their first time since 1991! Joining them is the all-star lineup of Mind Eraser, Night Birds, The Inflatable Children and Death First at what will one of the last shows in the old ABC No Rio space. It's also a benefit for the the organization which will get a new building in 2012 (we don't have an exact close date yet). $10 gets you in the door. No advanced tickets.

Other upcoming shows at ABC No Rio include Japanther with The Homewreckers, Devestation Wagon, TitFit on 10/29, Boom Boom Kid, Wud Link, Ilegales Sin Fronteras, and Mi Culpa on 11/5, Wound, Skelptarsis, Kama Rupa, and (A)Truth on 11/12,Miscegnator, Coke Bust, DBCR, Sick Fix on 11/19 (Coke Bust play later that night with Masakari at Acheron), Tombs & Inhuman on 12/3, and Mischief Brew, The Swaggerin' Growlers and more TBA on 12/10.

Japanther, who played CMJ last week at Party Xpo and DROM on 10/21, has one other date scheduled before the end of the year, on 12/2 in Troy, NY at EMPAC as part of a "commissioned performance piece."

As previously mentioned, members of Mind Eraser will hit Acheron next week (on 11/3) as part of The Rival Mob, with appearances from Young Offenders, Give, and Airfix Kits.

Check out a video of Citizens Arrest and other bands playing ABC No Rio in the early 90s, below...