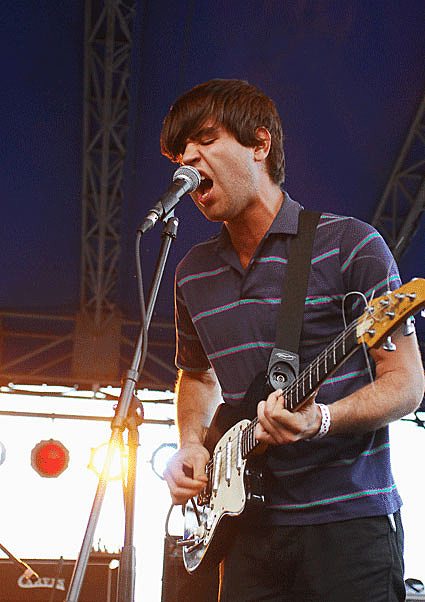 LA punks Abe Vigoda are going on tour across North America this July. That includes three NYC shows: Friday, July 17th the band plays an early set at the Whitney Museum, then a late set at the Cake Shop. The next night, Saturday, July 18th, the band is at the Monster Island Basement. All those NYC gigs are with tourmates Talbot Tagora, who, as we recently mentioned, are one of the Seattle bands that recently signed to Hardly Art.

The Whitney show is part of the museum's Dan Graham retrospective running from June 25th to October 11th. As we previously wrote, the museum is planning shows on July 10th, 17th, 24th and 31th, during its weekly pay-what-you-wish Friday 6-9pm slot. Those performances are to feature "young bands that have inherited the New York rock scene from bands that Dan Graham has written about and/or worked with, such as The Feelies, Television, and Sonic Youth."

The Feelies are one of the band's playing the museum -- they have an acoustic set scheduled for Friday, June 26th.

The newest Abe Vigoda release was the band's Reviver EP, which came out in February on Post Present Medium. "Don't Lie," from that record, is posted above.

All Abe Vigoda tour dates, with clips that include "Don't Lie" live with the Vivian Girls and more, below...

Abe Vigoda (with Kickball Katy of the Vivian Girls) - Don't Lie @ the Biltmore in Vancouver, BC on April 29th 2009