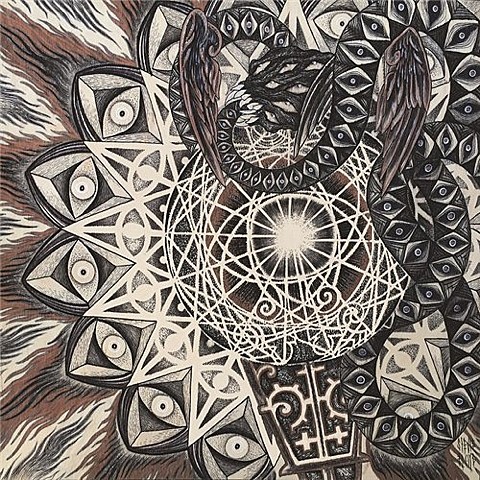 Olympia, WA metal band Abigail Williams, who just finished touring with Today is the Day, are streaming their new album The Accuser, which is out today on Candlelight. The band's style has changed considerably since they started out 11 years ago, as has their membership. In case you haven't been keeping up, their roots in symphonic metal and melodic metalcore are long behind them. They made the switch to a more straight-up black metal sound three albums ago (with 2010's In the Absence of Light) and it's only gotten more menacing with each new release.

Frontman Ken Sorceron is the only founding member here, and besides guitarist Ian Jekelis, it's an entirely different lineup than their last album (2012's Becoming). The current lineup features a murderer's row of USBM heavyweights, including two people who (like Ken Sorceron) are/were members of Lord Mantis. There's guitarist Jeff Wilson (Wolvhammer, Chrome Waves), drummer Charlie Fell (Cobalt, ex-Lord Mantis, ex-Avichi), bassist Will Lindsay (Indian, Lord Mantis), and a guest appearance by Neill Jameson (Krieg, Twilight). (At live shows another Wolvhammer member, Micah Leonetti, plays bass.) That's a highly pedigreed group, and the record sounds a lot like you would expect if you know some of those bands. It's a raw, gnarly piece of black metal that brings to mind prime Nachtmystium or early Krallice.

Stream The Accuser below (via Decibel)...