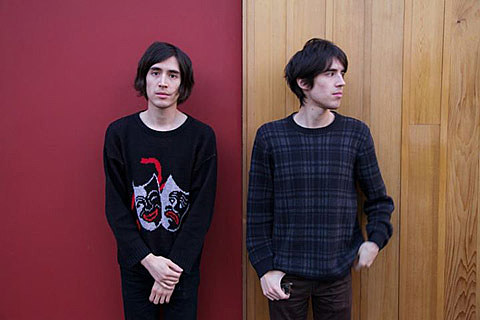 Christoph and Anton Hochheim are current members of The Pains of Being Pure at Heart (guitar and drums, respectively) but also make music on their own as Ablebody. (They were also both in The Depreciation Guild with former TPOBPAH drummer Kurt Feldman.) Sonically indebted to '80s UK indie (they've been known to cover The Servants' "The Sun, a Small Star"), the brothers make dreamy janglepop with dash of melodrama. Ablebody will release a new single, "After Hours," next month and you can stream the A-side (and a few other tracks) below.

The Hochheims are going to be extra busy soon, as Ablebody are now opening on The Pains of Being Pure At Heart / Fear of Men tour which starts next week and concludes at NYC's Bowery Ballroom on May 22. Tickets are still available.

Before that you can catch Fear of Men, meanwhile, in NYC where they're playing three free shows over the next week. All TPOBPAH/FoM/Ablebody dates are listed, along with the new single stream, below..