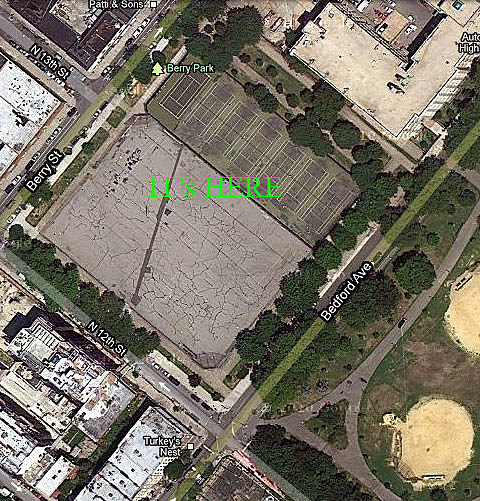 It will look much prettier when they build a stage and stuff, but those asphalt softball fields are where Beirut is playing on June 17th (tickets) and Guided by Voices & Wavves are playing on June 18th (tickets). The "Open Space Alliance benefit shows" are both part of the 2012 Northside Festival for which you can also buy a badge.

Whether OSA has plans to use the 'McCarren Park' space on other dates this summer remains to be seen, but there have been rumors of OSA trying to "sponsor their own concert series ten blocks down" from a waterfront area that was being proposed for a controversial "Brooklyn Night Bazaar."

I'm assuming the OSA "concert series" is not the JellyNYC Williamsburg Waterfront Pool Parties which are probably not returning this summer after much controversy last year. That controversy was especially related to Jelly's relationship with OSA.

There will reportedly still be concerts at Williamsburg Waterfront again this year though, but probably not free ones. McCarren Pool meanwhile (Jelly's original free show location), also part of McCarren Park, is still being wasted I think.

Stay tuned for more updates on all of this.