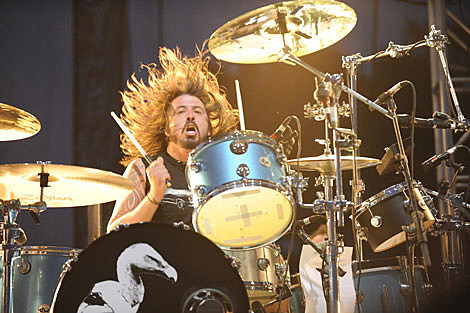 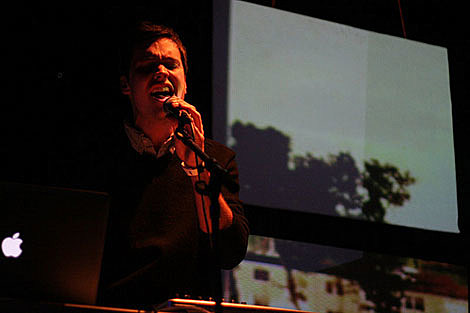 Two very different acts - Washed Out and Them Crooked Vultures - both made their NYC debuts earlier this month (all the way back before CMJ). The first, Them Crooked Vultures are industry veterans and masters at playing live music. Washed Out on the other hand was playing live for the second time ever, and without much of a band backing him. Both came into town with lots of hype, and both left leaving people with mixed reactions...

Them Crooked Vultures is unswervingly faithful to its pedigree: along with Mr. Homme, best known as the frontman of Queens of the Stone Age, it features Dave Grohl, the former drummer in Nirvana, and John Paul Jones, the former bassist in Led Zeppelin. That their output delivers a punch to the gut can only be seen as the fulfillment of a promise. The band doesn't feel like naked derivation, but its parentage is hammered home with every fat and bruising riff...

...What was missing on the whole was a semblance of vital messiness: the band had been too efficient, too terse, maybe even too tight. But a shuffle called "Warsaw" ended the show on the right sprawling note. Unraveling in the middle and racing to a feverish end, it caught the volatility that a band like Them Crooked Vultures tempers at its own peril. How it will sound on the band's self-titled studio debut, due out soon, is anyone's guess. [NY Times]

The NY Times also took a look at Washed Out (Georgian Ernest Greene), who played Monday, October 19th at Santos (with Restless People opening). Though we've heard mixed things, Jon Caramanica of the Times loved it.

In short order Mr. Greene has alighted on a mature idea, but its translation to stage wasn't so certain. His songs rely on pristine, precise textures, and at times the Mike Tyson-strength speaker system at Santos undid him, especially during the first four songs, which were new. Played by Mr. Greene with a keyboardist, Joel Stevens, they were longer and more plaintive and more pessimistic than his EPs. At times they recalled the moody electronic duo Matmos. At times they didn't.

Once Mr. Stevens left the stage, though, Mr. Greene visibly loosened, giving shape and force to his songs, which can feel abstract on record...

Washed Out's "You'll See It" is NPR Music's Song of the Day today.

Them Crooked Vulture's self-titled debut is scheduled to come out November 17th on DGC/Interscope. The tracklist is below. Their first single, "New Fang," debuted yesterday (10/26) on Twitter.

Them Crooked Vultures tracklist
01. No One Loves Me And Neither Do I
02. Mind Eraser, No Chaser
03. New Fang
04. Dead End Friends
05. Elephants
06. Scumbag Blues
07. Bandoliers
08. Reptiles
09. Interlude With Ludes
10. Warsaw Or The First Breath You Take After You Give Up
11. Caligulove
12. Gunman
13. Spinning In Daffodils