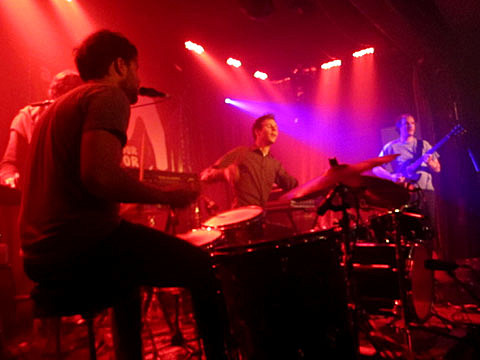 After two songs of sweating onstage, the drummer for Absolutely Free -- who made their live debut last night at Mile End venue La Salla Rossa -- peeled off his flannel shirt to reveal a Neu! t-shirt underneath. But by that point we already got it, though a Can shirt might have been more to the point.

Featuring four fifths of DD/MM/YYYY, as Absolutely Free they still make complex, time signature-shifting music, but this was less manic, less skronky with decidedly groovier rhythms. (For me, that's a definitely an "Oh Yeah.") With no recorded music to hear yet and a short 20-minute set, I don't think we've got a full picture of what these guys are capable of, but it was a very promising first show.

You can watch a couple live videos of Absolutely Free in action at the bottom of this post. The band are in the midst of recording their debut album which should be out later this year.