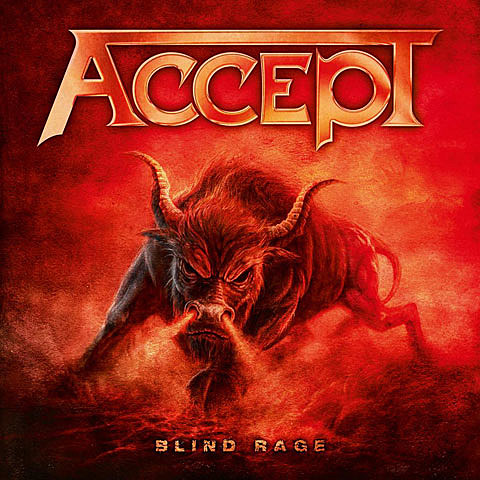 Germany's restless and wild icons Accept will be celebrating the release of their next album, Blind Rage, with a world tour. The full-length will be the metal institution's 14th and their third since reforming in 2009 without original singer Udo Dirkschneider. Nuclear Blast have set the album's street date as August 15. Then, the band will embark on an extensive Euro jaunt, but will warm up with four dates in the States. The US mini-tour gets going out west in San Diego with Metal Church on September 11, moves to Los Angeles the next day (Raven and Metal Church), receives a Las Vegas appraisal in a club owned by Danny Koker of Pawn Stars fame (Vegas is weird), and then hoofs it to New York's Gramercy Theatre on September 15 with Raven (Tickets). Five days, 3,000 miles. Balls to the wall, indeed. (Also: "WTF." - ghosts of the Oregon Trail.)

Accept is a foundational metal band, paving the way for power metal, speed metal, and thrash. They officially took on their name in 1976 after previously gigging around Solingen as Band X. In the '80s, the group came into their own. Udo Dirkschneider's anthemic screech, Wolf Hoffmann's searing riffs, Peter Baltes' solid bass lines, and Stefan Kaufmann's pounding drums were responsible for album's like 1982's Restless and Wild, 1983's Balls to the Wall (adding Herman Frank as a second guitarist and owning a cover that confused your parents), 1985's Metal Heart (swapping Frank for Jörg Fischer), and 1986's Russian Roulette. Their classic strain of heavy metal was largely filler and B.S. free, preferring instantly recognizable power chords and digestible song structures that stuck in your brain. The group split in 1989, reformed in 1992, called it a day again in 1997, but were resurrected in 2009 with Mark Tornillo behind the mic, among other lineup fluctuations. (Baltes and Hoffmann are your O.G.s.) What's amazing is Accept have shown no comeback decay. 2010's Blood of the Nations and 2012's Stalingrad: Brothers in Death were well received by fans, placing near their prime material. Blind Rage looks to continue this trend, despite sporting a cover looking like Worf post bong hit.

Their shows pair the outfit with another surprising reformation success. Raven's brand of high-energy NWOBHM was dubbed "athletic rock" by '80s critics due to its sprinting speed and nimble playing. The metal musketeers never broke up, but have been prone to hiatuses. Yet, in 2009, the trio pumped out Walk Through Fire, a record as solid and speedy as their killer classic run of Rock Until You Drop ('81), Wiped Out ('82), and All for One ('83).

All of Accept's tour dates, along with reams of streams appear below.