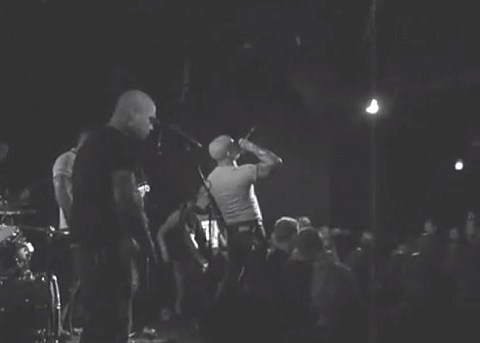 Brooklyn punk/metal venue Acheron faced some controversy over the weekend when they booked an Oi! skinhead show with Oxblood, Offensive Weapon, Stormwatch, The Wolverines, and Maddog Surrender on Saturday (9/21). Certain events that took place at the show prompted the venue to apologize to their regulars. A Facebook post from the venue reads:

It's 2013 and this should not have to be said, but let it be known that the Acheron has no patience or sympathy for any form of intolerance or fascism. The bullshit debate over Death in June is nothing compared to the unfortunate surprise we were presented with tonight. To any regulars that felt they needed to leave, please accept our apologies and know that more vetting will be done on all future shows.

In the comments they continue:

To be clear: this is not directed at the promoters of the show, but at a certain segment of the crowd who made my patrons and staff uncomfortable, and me as well.

...No one was out of line and the crowd was generally very polite and under control. I have no personal issue with anyone at the show and certainly not with the promoters. As a promoter myself for nearly 20 years. I am certainly sympathetic and understanding. Nonetheless, when a member of the crowd says to my door person "you don't get to talk to me. You're not even white". I have a responsibility to address that.

...I just want my regulars and those that see offensive things posted on the internet to know that we do not support the views espoused by some members of the crowd last night and would rather not, at the end of the day, be party to those who would literally wear intolerance on their sleeve. As a business owner, I will always be polite and treat customers with respect. However, I would rather not invite customers that would alienate other customers.

The show was initially kept somewhat of a secret; Acheron never listed the show on their Facebook or website, and didn't even reference any details in their apology. The venue and address are even absent from the show's Facebook event on the label's site and from the flyer. The show is practically non-Googleable, and in a YouTube video we found of Offensive Weapon's set at the show (which also doesn't list the name of the venue), the singer (at 5:50) mentions that they kept the show a secret because of their "friends in the Antifa" who they then dedicate a song called "Yellow Journalist" to.

Antifa is an anti-fascism group who makes it a point to try and shut down shows they believe include bands with fascist beliefs (like Death in June for instance). Members of Offensive Weapons and/or their associates have been pictured wearing Anti-Antifa shirts (not to mention red suspenders). According to record label, Pure Impact, Offensive Weapon are "one of THE non-PC American skinhead bands of the moment, tough Oi! with a touch of hardcore, true heirs to the old Youth Defense League style." But according to some, "All 'no politics' means for these lowlifes is: boneheads welcome."

Regarding the political or non-political motives of the bands on the bill, in response to the venue's Facebook status, Heidi Cavegurl Witmann (self proclaimed girlfriend of Oxblood's drummer) commented:

Seriously? There WERE NO NAZI BANDS THERE LAST NIGHT...there was a mixed crowd there and a few with opposing viewpoints and sure, I saw a few white power skins there...but I actually had a GREAT time last night, as ALMOST everyone was on their best behavior...funny that it seemed like it was the "ladies" who caused the only real ruckus. Fuckin sad...I actually dug the Acheron and it's staff until this thread. This is just another reason why I don't even make it out to see my own boyfriend drum for Oxblood. I have known them all for years and and this racist talk about any of those bands is so fucking tired already. I don't date or cohort with racists and I certainly don't stay commited to one for 13 years. I went to see our best friends (Frank and Val Bruno) come from Texas and to see and hear some kickass Rock and Roll...oh yea...and to watch my man kick some ass on the drums!! FUCK THE POLITICS and enough with the bogus racist hype already! Sheesh...way to ruin a gurl's night out. Ug.

Two videos from the show in question can be watched below...