DJ Pierre was a clarinet player from the Chicago suburbs. He was involved in local DJ battles, too shy to make many inroads into the Music Box crowd until his friend Spanky bought a cheap piece of gear called a Roland TB-303. It had been designed in 1982 to play basslines for buskers, but was fiddly, had failed commercially and had been pulled from the market in 1984. Spanky and Pierre discovered that no matter how much they turned the knobs and tweaked the controls, it sounded less like a bassline than an approximation of a melting brain. The batteries died, they put new ones in, but the brain-melting sound was still there - it just wouldn't die. So they recorded it, over a beat that was already in the 303, called it 'In Your Mind', and gave a cassette of it to Ron Hardy. The first time he played it, 'In Your Mind' cleared the floor. A few spins later, at four in the morning, it caused a riot. People were screaming, on their backs kicking their legs in the air, slam-dancing into each other. Someone taped the mayhem and it got passed around Chicago on a bootleg cassette labelled Ron Hardy's Acid Tracks.

House had been minimal, two steps away from conventional song structure, but acid house sounded like nothing on earth - atonal, disorientating, genuinely frightening. Spanky and Pierre released the freshly rechristened Acid Tracks under the name Phuture and invented a whole new subgenre which was as far removed from Trans-Europe Express as it was from James Brown. "Just as Britain was deluged with first-generation house, Chicago started creating opportunistic skirmishes, all utilising the Roland 303, this weird contraption, a piece of junk neither Shep Pettibone nor Trevor Horn would give the time of day to. Phuture released the even heavier 'Slam'; Bam Bam's 'Give It to Me' repeated the title, deadpan, over a woman's cry. All shared the random squelched melody generated by the 303. Charismatic and modern, these records were exported to the UK, snapped up by DJs eager to be seen with a new square foot of Chicago real estate, and it was chaos. - [Excerpt from Bob Stanley's Yeah Yeah Yeah: The Story of Modern Pop]

Is it possible that acid house progenitors Phuture have never performed live in NYC? Apparently it is but that will change tonight as DJ Pierre and Spanky (plus new member Lothario Lee) play Williamsburg club Verboten (8/7). There will also be sets by Night Slugs co-boss L-Vis 1990, the Night Slugs-signed Kingdom, and Fade to Mind's Prince William. Tickets are available.

Phuture have no other North American dates lined up but they do have a few UK/European dates in September. All dates are listed, along with streams of some of Phuture's classic acid tracks, below... 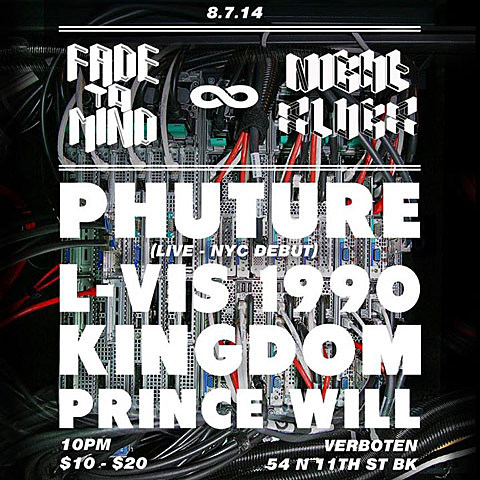