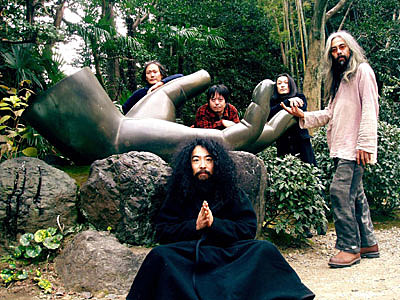 The above MP3s are from Acid Mothers Temple's new psychedelic album, Have You Seen The Other Side Of The Sky?, out now on Ace Fu Records....

Featuring new vocalist Nao alongside an all-star cast of Japanese experimental musicians, including former members of The Boredoms, Ghost, Zeni Geva, and Gong, this newly reenergized ensemble has created one of the most blindingly transcendent releases in the 10+ year, 25+ release history of the Acid Mothers Temple collective.

AMT's Makoto Kawabata and Higashi Hiroshi are currently touring Japan with San Diego's Maquiladora, and Kawabata is also scheduled to take part in the Japanese New Music Festival tour, in which Ruins and Acid Mothers Temple will play individually and together as seven separate acts.

The tour kicks off September 2nd at Tonic in Manhattan, with a date the next night at Northsix in Brooklyn. All dates below...

Zubi Zuba X: (Yoshida/Tsuyama/Kawabata) Eccentric poly-rhythmic a cappella ensemble. It covers from Gregorian chant to ethnic music, to do-wop to hardcore screaming, heavily using irregular rhythms and polyrhythm. All sorts of ideas and aberrant musicality overturn the image of a cappella. their totally meaningless lyrics and desperate performances throw the audiences into the abyss of the laughter and admiration. it makes the concept of "singing ability"nonsense.

Akaten: (Tsuyama/Yoshida) Formed in 1995 with the motto of "irresponsibleness" and "perfunctoriness." Using daily commodities like scissors, toothbrush, zipper, camera, and plastic bottle as percussions, and shouting their brand names over and over as the "songs," the show is performed under the concept of low cost and maximum sound effect. AKATEN is the experimental convenience store punk band that provides the sound images of cheap and simple daily lives.

RonRuins:
Ruins Alone: (Yoshida) RUINS is pioneer of Drum & Bass duo. Tunes are complicated and mysterious, and songs are sung in the language of their own invention. It's high-tension, wild, heavy, speedy, acute, and powerful tremendous ensemble never sounds like they are only two players. since last bassist left Yoshida still seeking a bassist and currently he has been playing as RUINS ALONE. playing RUINS songs with sampling bass. this time Yoshida will play songs from Koenji Hyakkei and Korekyojinn too.
Zoffy: (Tsuyama/Kawabata) Formed in 1998. Zoffy's music hints both at the members' deep musical knowledge via their improvised performances of troubadour music and European trad, and also at their deep love for rock via their destructivist covers of classic rock songs, that no longer sounds like anything but ZOFFY. The group believes that humor is essential in music, and their unprecedented performances stray far from the beaten track. Is this the Ultima Thule that rock music has long been aiming for?

Shrinp Wark: (Kawabata/Yoshida) A new improvising duo consisting of Yoshida from Ruins and Kawabata from AMT. group inspired by This Heat and band name taken from their song "Shrink Wrap". Cosmic chemical reaction sound that embraces a multidimensional chaos based upon the principles of minimalism, an anarchistic warping of the time axis, and ultra-accelerated revolving of time particles.

Acid Mothers Temple SWR: (Kawabata/Tsuyama/Yoshida) Acid Mothers Temple have rapidly become acclaimed as the greatest, most extreme trip psychedelic group in the world. SWR is the AMT Family's most powerful battle-formation yet. featuring Tsuyama and Kawabata from the original AMT and Yoshida from Ruins. their crushingly acute freakout sound will pulverize the world's legions of wannabe psych groups.