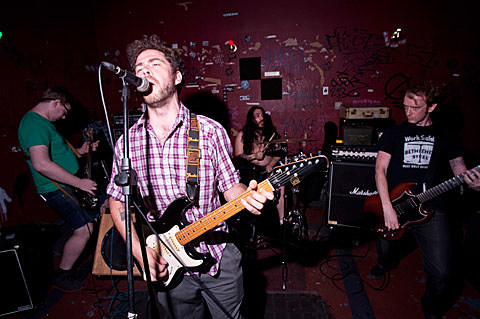 Acid Problem's noisy brand of hardcore tips its hat to 80s punk, squealing Sub-Pop/Am-Rep and punk favorites like the late-great Cold Sweat, Kim Phuc or Slices. Live, the NYC crew is a force to be reckoned with and their new self-titled EP ain't no slouch either. Check it out in full below. Limited to 311 copies (clearly a nod to the greatest band ever) (not really) on vinyl, pick up yours via 16oh Records.

Acid Problem have a single show as themselves (I'll explain in a minute) on their calendar so far, at Da Bath Haus in New Brunswick on October 13. There they'll be joined by Brain Slug, Dipers and Ugly Parts. They'll also appear as the Ramones at Death By Audio as part of their Halloween covers show on 10/31. If you can't make it out to NJ, check out their recent live appearance on WFMU as an indicator of their live show, and look below for some video as well.

Live video and that stream is below.