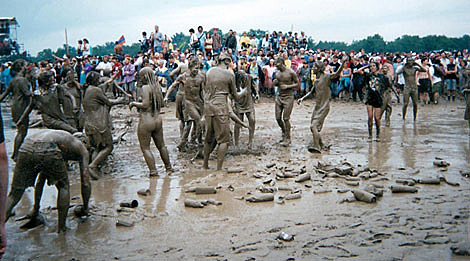 Tickets for the Austin City Limits festival - happening this year on October 2nd-4th in Austin's Zilker Park - go on sale today (Tuesday, April 7th) at 11am EST. That sale happens in advance of the fest's official lineup announcement, scheduled for April 28th.

Calgary festival Sled Island hasn't announced its lineup either. But Sled Island does have a pre-fest fundraiser planned for Saturday April 11th (tickets on sale). Headlining that show at Calgary's Royal Canadian Legion will be 2008 fest performer Fucked Up (video below). Sled Island itself takes place June 25th-28th. Curating this year's festivities will be Colin Newman from Wire (who also played Sled Island '08).

Camp Bisco, a three-night fest headlined by The Disco Biscuits, is happening on July 16th-18th in Mariaville, NY. The artists playing include Nas, Chromeo, The Orb, Dr. Dog and more (full lineup below). Tickets are on sale now.

Monolith Festival is happening again this year in September at Red Rocks Ampitheatre in Colorodo. No acts or dates have been announced yet - but last year's lineup was pretty stellar with TV on the Radio, Justice, Band of Horses, and more playing.

Merge Records is running its own 20th-anniversary festival, XX Merge, on July 22nd-26th in North Carolina. The lineup has been partially announced - with acts like Superchunk, Spoon, Conor Oberst, and M. Ward confirmed. Five-day passes go on sale Wednesday, April 8th at 10am.

Other previously reported summer fests include:

Coachella in Indio, CA, on April 17th-19th. Tickets on sale.

Sasquatch in Quincy, WA on May 23rd-25th. Tickets on sale.

Northside Festival in Brooklyn (June 11th-14th). Badges are on sale.

Bonnaroo is happening too, from June 11th-14th in Manchester, TN.

The Flaming Lips will also be co-curating and headlining one night of ATP NY, September 11th-13th in NY's Catskills. Tickets for that are still on sale.

Lollapalooza on August 7th-9th in Chicago, IL. Tickets (and VIP passes) are on sale now. There have been some rumored bands, but the official lineup comes out April 21st.

Bumbershoot in Seattle on September 5th-7th. Three-day passes are on sale now.

There are more confirmed festivals, but I think that's enough for this post. In the unconfirmed department, Woodstock '09 is currently shoping for a venue.

Camp Bisco's lineup, video of Fucked Up at last year's Sled Island Fest and Green Day at Woodstock '94 below...