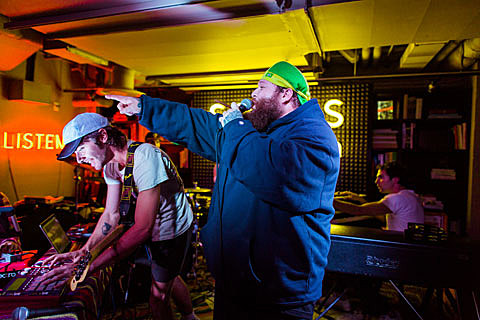 Action Bronson is releasing his new album, Mr. Wonderful, on March 24 via Vice/Atlantic and he's now announced that he'll celebrate it in NYC on release day at Terminal 5. Tickets for that show go on sale at noon on Friday (1/30) with an AmEx presale starting at noon today (1/28).

He's also got a sold-out NYC show happening much sooner at BB King's on Monday (2/2), which was rescheduled from 1/26 due to the blizzard. Refunds are also available if you can't make the new date.

Besides that, Bronson plays a few festivals including Coachella (and a Coachella Sideshow), Tampa's Big Guava Festival (with The Strokes, Pixies, Passion Pit and more), and Miami's inaugural Rolling Loud Festival (with Schoolboy Q, A$AP Ferg, Juicy J and more).

All dates are listed, with the single from Mr. Wonderful, below...