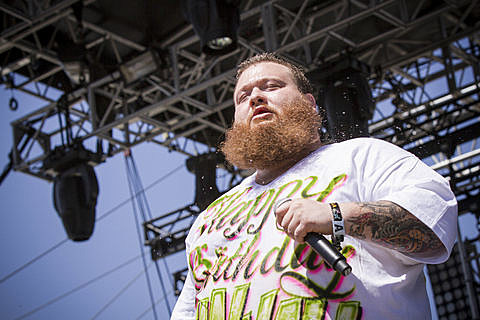 NYC rapper Action Bronson sold out the release show for his upcoming Mr. Wonderful album, but he's now added a second show happening the next day at the same venue, Terminal 5 (3/25). Tickets for the new date go on sale Friday (2/27) at noon with an AmEx presale starting Wednesday (2/25) at noon.

He's also part of the just-announced lineup for NXNE, and plays other festivals too, such as Sasquatch!, Coachella and more. Updated dates are listed, with his most recent single "Terry,", and a just-released trailer for the new album, below...

The trailer came with this message:

Today kicks off Action Bronson's #mrwonderfulwednesdays where he'll be releasing all kinds of content on Wednesdays leading up to his major label debut Mr. Wonderful out March 24th via VICE / Atlantic. To kick it off, you can watch a Mr. Wonderful teaser starring Mr. Wonderful himself, Party Supplies and the younger Pete from Pete & Pete. The teaser, which features a new track from the album "Only In America" ft. Party Supplies, has Bronson in the studio for a Boogie Nights studio scene inspired tribute: Action as Dirk Diggler and Party Supplies as Reed Rothchild. If this is any indication of what will be dropping on the Wednesdays to come then it would be in everyone's best interest to check back!