Action Bronson at Gramercy in 2011 (more by Brook Bobbins) 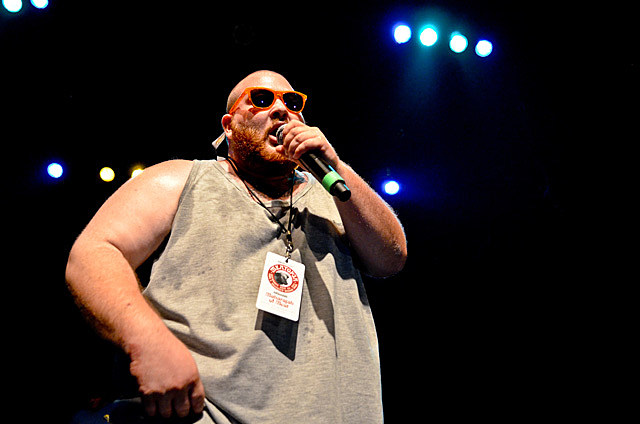 Action Bronson, who played the Girls/Real Estate afterparty at Tribeca Grand hotel this past Saturday (how was that?), has a few more shows coming up including another hometown show in NYC at Southpaw on February 9 with Mr. Muthafuckin' eXquire, who he has shared many local bills with in the past, most recently at Highline Ballroom on 12/27. The bill also includes Kyle Rapps, Soul Kahn, special guest Illustrate, and DJ Meka (2DopeBoyz). Tickets are on sale.

Mr. Muthafuckin eXquire, who dropped a new mixtape for Christmas, meanwhile plays a Chicago show this weekend with Chicago rapper ShowYouSuck who recently released a new mixtape too. eXquire also has a show schedyled at Echoplex in LA on 2/28 with Das Racist.

Action Bronson recently released his first new track of 2012. Find a link to that HERE.

All tour dates dates and an 11 minute video feature made from footage shot at the recent Highline Ballroom show, below...