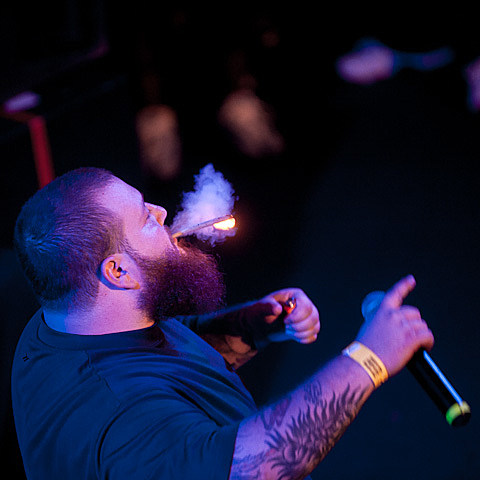 In late August, Action Bronson tweeted, "LA is gonna have a new resident soon," presumably implying that the Queens rapper has plans to move out west. We haven't heard anything about it since, but if he is leaving (or did already), he's still giving NYC plenty of chances to see him. On Friday (9/28) he's playing a Bespoke Group-presented and Hyundai-sponsored show in NYC at Chelsea Market (75 9th Ave) with RL Grime. RSVP is open. Doors are at 9 PM for this 21+ show.

Action Bronson, who just played Beauty Ballroom in Austin, will also be the opening at Cypress HIll's annual "Haunted Hill" show, which happens at Best Buy Theater on October 30, the day before Halloween. Tickets for that show are available. Other Halloween options in NYC include Wold Inferno Friendship Society at Warsaw, Smashing Pumpkins at Barclays Center, and The Misfits annual Halloween show at Highline Ballroom.

In other Action Bronson news, he recently dropped a new Party Supplies-produced song called "It's Me," which you can download above, or stream below, along with a list of all dates.