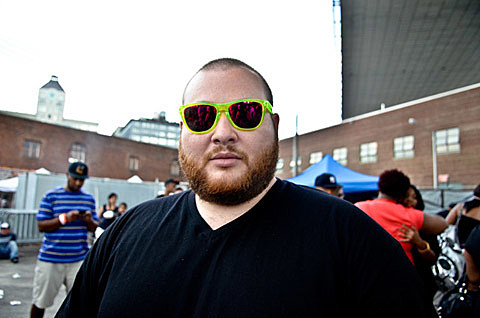 If you're looking for good hip hop shows this weekend, there are quite a few options. You can start Saturday (7/23) early with Theophilus London at 4 PM in Weeksville Garden Center with Phony PPL.

At night (7/23), as mentioned, G-Side, who just played Pitchfork Fest, will stop by NYC at Tammany Hall as part of their short tour.

If you don't end up there, underground Queens rapper Action Bronson will play Saturday (7/23) at Gramercy Theatre. Tickets are available. Action Bronson recently dropped his debut Dr. Lecter, which you can purchase at his website. His style is pretty much lifted from 90s boom bap, but Action can get away with that, especially since 90s heroes Wu-Tang Clan have him featured on their upcoming compilation Legendary Weapons, which will be released on Tuesday (7/26) via E1 Music. Check out the track with him, Ghostface Killah, and Termanology below. Also check out a video of the Dr. Lecter track "Get Off My P.P."

On Sunday (7/24), noise rapper Death Grips, who just played the Gang Gang Dance afterparty at Santos, will play a Jelly RockBeach show with Bass Drum of Death, The Miracles Club, and Night Manager. As commenters have discussed, Death Grips played the Santos show with Zach Hill on drums. Hopefully we can count on Zach sticking around for the Rock Beach show (Death Grips also play a secret show LATE Friday night, Saturday morning, somewhere in Brooklyn).

The extraordinarily prolific Tech N9ne will stop by Starland Ballroom on Sunday (7/24) in Sayreville, NJ as part of his tour. The tour includes other artists on Tech's own Strange Music label including Krizz Kaliko, Big Scoob, Kutt Calhoun, Jay Rock, ¡Mayday!, and others. Tickets for the NJ show are on sale now. The tour is in support of Tech's recently released LP All 6's and 7's, which you can purchase at the Strange Music webstore.