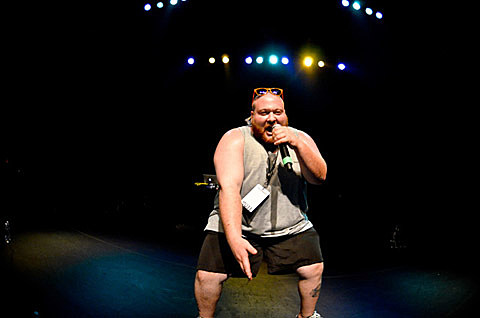 Action Bronson, who can you can vote for as one of the XXL freshmen of 2012, and who played at the Hip Hop Hanukah show at S.O.B.'s last Thursday, will play another show in his home city before the year ends at Highline Ballroom on December 27. The show is with Mr. Muthafuckin' eXquire (who recently played a BV-presented show at Glasslands with G-Side), DyMe-A-DuZiN and The Doppelgangaz. Tickets are still available. He doesn't appear to have any other scheduled shows at the moment.

Action Bronson recently released the new collaborative LP Well Done with Statik Selektah. Get your copy at iTunes. You can also watch the video for album track "Not Enough Words," and stream another one, "Coca Butter," below.

In other news, Action Bronson recently remixed Justin Beiber's holiday jam, "Mistletoe," not long after dropping a track with Asher Roth called "Choices," both of which you can stream below. Not sure if he's joking with these collaborations, but I kinda hope he is. Plus, collabing with the Biebs is way more of a Drake thing to do, which we know Bronson's mentor Ghostface Killah would NEVER approve of, and in Ghostface's book of dont's, an Asher Roth collaboration isn't far behind.

songs and videos below...