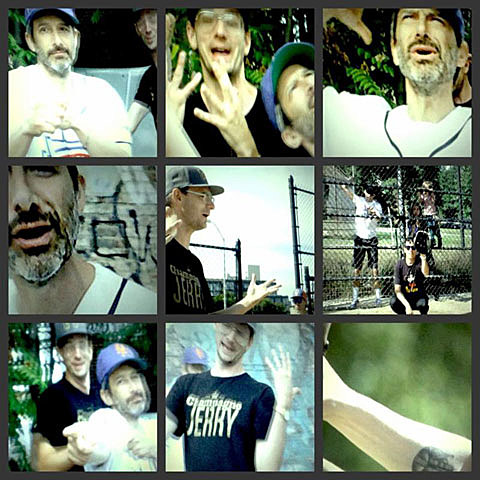 Kathleen Hanna isn't feeling well, so her husband Adam Horovitz aka Ad-Rock will be filling in for her as DJ at MoMA's Pop Rally event tonight (11/21). Kim Gordon's group Body/Head also performs and tickets are still on sale.

You can still catch Kathleen soon though, but on the big screen, when "The Punk Singer" opens in theaters on 11/29 (maybe you caught the documentary as part of Doc NYC). Ad-Rock is also featured prominently in the film, and even filmed a scene.

It's not all DJing, movies and bass playing for Ad-Rock these days though. The former Beastie Boy reportedly also raps a few verses on a forthcoming track called "Yo Kev" that he co-wrote with rapper and performance artist Champagne Jerry who he has been collaborating with lately.

"CHAMPAGNE JERRY also known as Neal Medlyn is, by far, the greatest rapper in the world. He likes snacks, books, sexual intercourse, and rhyming."

If you don't know, now you know. Listen to "Tampa Realness" below - the track "was written by Champagne Jerry (lyrics) and Adam Ad Rock Horovitz (music) with additional production and mixing by Max Tannone. It is dedicated to the city of Tampa and all things neon, Four Loko, and teal. Adam wrote the beat on a plane to Hawaii, CJ wrote the lyrics on a bus in Brooklyn." Stay tuned for "Yo Kev".

"Tampa Realness" and "Yo Kev" will appear on Champagne Jerry's album For Real You Guys which is being rolled out one single at a time, and one monthly show in NYC at Joe's Pub at a time. The next show is December 7th and Ad-rock will be in the house, like he has been for many intimate shows at Joe's Pub in the past, sometimes with Bridget Everett who is also a Champagne Jerry collaborator, as is Carmine Covelli (who is in both Kathleen Hanna's band The Julie Ruin and Bridget Everett's band the Tender Moments) and Max Tannone (whose credits include Jaydiohead).

We recently caught the Julie Ruin at Fun Fun Fun Fest and at MHOW, and not that long ago at Union Pool where Ad-Rock was reportedly seen hanging with Champagne Jerry.

Champagne Jerry music and videos below....