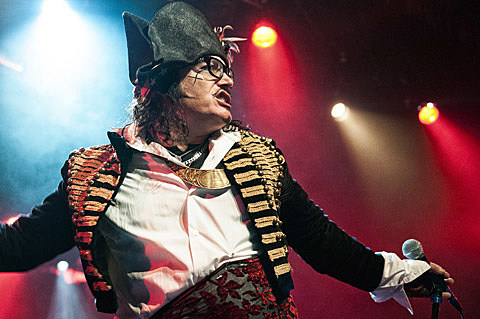 Adam Ant released his first album in 18 years in January, titled Adam Ant is the Blueblack Hussar in Marrying the Gunner's Daughter. The double album is probably not what anyone expected, much of it very low-fi and definitely weird. Jumping from style to style, and featuring contributions from former Ant Marco Pirroni and Morrissey guitarist Boz Boorer, it's a mess, yes, but an interesting one, and well worth checking out. The video for bluesy lead track "Cool Zombie," and a Spotify stream of the whole album are below.

With the new album out, and having had a successful and well-received North American tour last year (he sold out Best Buy Theater here in NYC), Adam Ant has announced a big North American summer tour. This includes two nights in the Big Apple at Irving Plaza on August 16 and 17. Tickets to these shows go Livenation and Music Geeks presale on Wednesday (4/10) at 10 AM with the regular on-sale happening on Friday (4/12) at 10 AM.