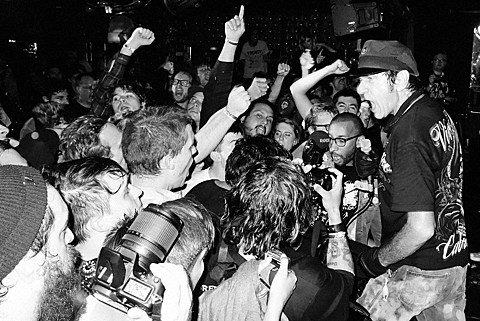 Two West Coast punk veterans, Adolescents and The Weirdos, will be hitting the road together this June. Their trek includes a NYC show on June 26 at Gramercy Theatre. Tickets for that show go on sale Friday (4/10) at 10 AM. All dates are listed below.

Adolescents have been around pretty consistently in one form or another for a while now, having played NYC not long ago opening for Subhumans. They're still led by founding vocalist Tony Cadena and founding bassist Steve Soto, who were both on their classic 1981 self-titled debut, but the rest of the band joined on in recent years.

The Weirdos, meanwhile, briefly reunited in 2004-2005 and then again starting in 2013, and as far as we can tell this is their first time in NYC since that '04 reunion. They're also still with their two constant members, vocalist John Denny and guitarist Dix Denney, who were both there for their initial run as a band (1977-1981, which only produced singles and EPs) as well as for their 1990 reunion (and only) full length album, Condor.

Listen to some classics from both bands, with the list of dates, below...

The Weirdos - "Life of Crime"

The Weirdos - "We Got The Neutron Bomb"