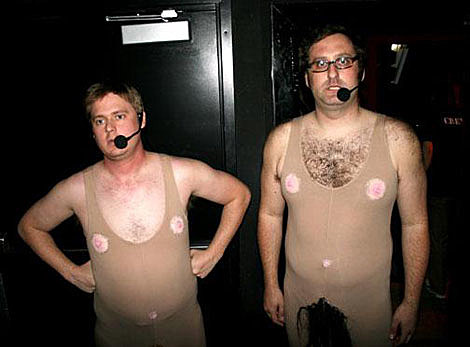 "Adult Swim Summer at Santos", a six-part series of free live shows at Santos Party House in NYC, kicks off tonight, June 11th. The show features the man connected to both the network and the club: Andrew W.K., Adult Swim's soon-to-be-reality-show-host and part owner, respectively. He'll be joined by friends and labelmates (and in one case, spouse) -- Cherie Lily, plus Aleister X, Bad Brilliance & Natalie Portman's Shaved Head open the show.

Each of the bi-weekly events at Santos will be curated by an Adult Swim writer/producer/star. So far, acts on the bill include Tim Heidecker and Eric Wareheim (of Tim and Eric Awesome Show, Great Job!), Aqua Teen co-creator Dave Willis, Delocated!'s Jon Glaser, musical acts Cheeseburger and A.C. Newman, and more.

Full lineup and more details below...

Crafted specifically for Adult Swim fans, the Adult Swim Presents Summer at Santos Series includes six live shows featuring a different musical and comedy performance each time. To host and create these shows, Adult Swim tapped into the best resource they know - their talent. Talent comprised of show creators and stars of Adult Swim series like Delocated, Metalocalypse, Aqua Teen Hunger Force and Tim and Eric Awesome Show, Great Job! were called on to curate their own slices of comedy and music heaven that will feature an array of unique talent chosen by each of them.

All six shows of Adult Swim Presents Summer at Santos Series will occur every other Thursday night, beginning on June 11, at the Santos Party House located at 96 Lafayette St. in New York City. Doors open at 7 p.m.; the show starts at 7:30 p.m. All shows are free and open to the public, ages 18 and up.

Adult Swim first teamed up with the acclaimed Santos Party House earlier this year and treated fans to a live show hosted by Delocated! star and creator Jon Glaser, with music from Andrew W.K. and Cheeseburger. The response was huge, so Adult Swim and Santos Party House are working together again to give fans more of what they want all summer long. Up-to-date information on the Adult Swim Presents Summer at Santos Series can be found at www.adultswimpresents.com.