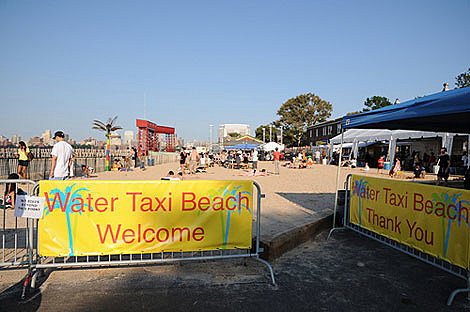 On Tuesday, August 4, AEG Live will be presenting soul-songstress ERYKAH BADU as the first of a number of summer shows at The BEACH at Governors Island, a new 3000-capacity waterfront venue in one of New York City's most historic locations...

...Other shows on AEG's line-up for THE BEACH at Governors Island include Badfish: A Tribute To Sublime on Saturday, August 29; N.E.R.D. with special guest Asher Roth on Wednesday, September 9; Lupe Fiasco on Friday, September 11; and Brazilian Girls on Friday, October 2. Tickets for the August/September shows are on sale now; Brazilian Girls on sale next Friday, August 14 at 12pm.

Janelle Monae is opening tonight's show (8/4). There is also a Mos Def show in September. More information in the Beach (from a press release) below...

The BEACH at Governors Island is a continuation and expansion of the outdoor concerts that bring thousands of New Yorkers to the historical Island from late May through early October every year. With 172-acres of greenery and national landmarks, Governors Island provides the ideal backdrop for summer shows with panoramic views that include the Statue of Liberty, the Brooklyn and Manhattan Bridges, along with the Manhattan, Brooklyn and Jersey City skylines.

Tickets to concerts at The BEACH at Governors Island are general admission, and there is also an adjacent shaded beer garden for fans to enjoy. Only a few minutes away from Manhattan, The BEACH at Governors Island has forged a relationship with the New York Water Taxi to make transportation to and from the island an easy experience for concertgoers.

The New York Water Taxi's roundtrip fare will be incorporated into the cost of the concert ticket, and Water Taxi's will leave every 15 minutes from the Battery Maritime Building Slip 7 on the Southern Tip of Manhattan, located next to the Staten Island Ferry Terminal. The closest subway stations to the Battery Maritime Building are: 1 at South Ferry, W at South Ferry, and 5 at Bowling Green. It is also a short walk from the Wall Street Area. Various city bus lines also service the Battery Park Area with stops near the ferry terminal. Taxis and car may pull directly in front of the terminal for drop offs only. There is NO parking at the terminal.

Tickets for upcoming concerts are available for purchase via Ticketmaster.com