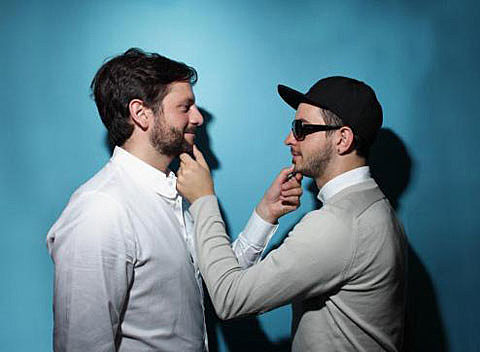 Aeroplane is now a one-man operation, Vito having amicably parted company with his bandmate Stephen Fasano. Not that we should be alarmed. "There are worse things in life!" says Vito. "Stephen's gonna do music on his own, I'm gonna do music on my own. I'm the studio guy, he was more the DJ so when the music became more important, the more I was alone in the studio. The future of Aeroplane was this album and I wrote it and played every instrument." The two are still on good terms: "He's picking me up tomorrow at the airport. I'm probably going to produce the stuff he writes in the future and I'm not going to have a word to say about it!"

The next edition of long-running dance (and some rock) party FIXED happens tonight (5/26) at Le Poisson Rouge with Belgium's Aeroplane (aka one-man operation Vito De Luca) and FIXED regulars JDH & Dave P. Aeroplane released a mixtape on soundcloud in April with remixes of Adele, Shit Robot, Alex Winston (who Star Slinger also just remixed) and others. Stream the mixtape below. Tickets for tonight's show are still on sale.

JDH & Dave P bring the other Belgian DJ, one who used to be the the other half of Aeroplane, The Magician (aka Stephen Fasano), to FIXED on July 9 at Good Units in the Hudson Hotel. Tickets are on sale. The Magician will also be performing at Camp Bisco during that trip, as will JDH & Dave P.

FIXED also has a party scheduled on Saturday (5/28) at Public Assembly with Parallels. Parallels (featuring ex-Crystal Castles drummer Cameron Findlay) plays the front room with Miho Hatori of Cibo Matto, who just announced a tour. People at Parties and JDH open the show, and Pendu Disco DJs play the back room with Butterclock and You.

The Aereplane mix is below...