Aesop Rock in Austin in August (more by Tim Griffin) 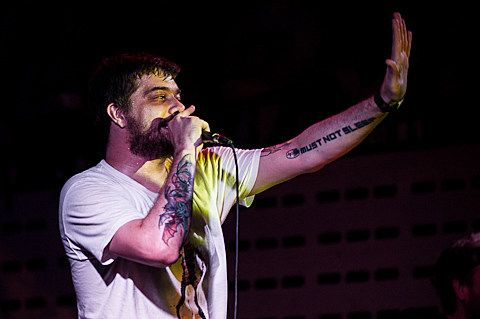 Aesop Rock released one of the best (and by the looks of these year end lists, apparently underrated) hip hop albums of the year with Skelethon, his first solo release since 2007's None Shall Pass and easily his strongest since at least 2003's Bazooka Tooth. He supported that record with a tour which did make it to NYC, but had to be cut short due to Hurricane Sandy. He's rescheduled dates in many of the cities he cancelled on his recently-announced 2013 tour, which also hits NYC for a show on February 9 at Irving Plaza. The tour is with Rob Sonic, DJ Big Wiz, and Busdriver. Tickets for the Irving Plaza show are on sale now.

In honor of the new year, Aesop Rock revealed a previously unreleased song from the Blockhead-produced days around year 2000. The track is called "Hall of Game" and you can download it for free, plus check out a list of all tour dates, below.